UFC staged a lackluster card at the UFC Apex late last night marked with a number of savage cuts. The card was loaded with Contender series alumni – meaning that it’s more than likely majority of card was duking it out for $10k to show ($10k to win purses)

But the broadcast featured something peculiar.

Ronda Rousey, the former UFC women’s bantamweight champion, was included in the Latino Heritage Month tribute video that was shown at UFC Vegas 60. Many spectators were perplexed.

A lesser-known truth about Rousey is that she is part Latino. The former champion acknowledged that she was half Venezuelan in a 2017 interview with Fox News Latino. Rousey also claimed that she has always been shunned because she didn’t look the part:

“I’m half Venezuelan; I’m just as Venezuelan as Maria is…. And when I was younger and we went to a Catholic school that was like 99.9% Latino I was really an outcast there. I had so much trouble learning to speak English that I never learned how to speak Spanish.”

“I didn’t learn to speak coherently in English until I was around six years old. So I didn’t look it, I didn’t speak it and I was kind of ostracized from that community a little bit. I think it’s so cool that now people are starting to recognize that, yes, this is my heritage, this is where our family comes from. I’m glad to be getting a lot more acceptance as really being a Latina even though I don’t look like it.” 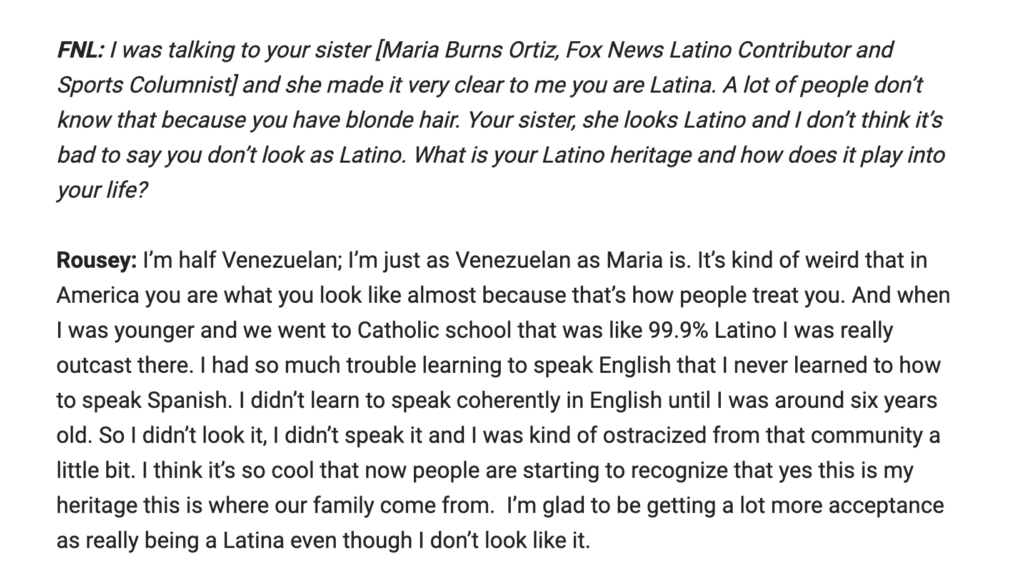 Rousey’s mom is also part black – AnnMaria Waddell  is the granddaughter of Dr. Alfred E. Waddell, one of the first Black physicians in North America.

The Olympian said she wants to enroll in an immersion program to ultimately become bilingual in a 2015 interview.

“My mom was just talking last night about going and doing like an immersion thing next summer because I had soo much trouble speaking in general, you know. Like my sisters learned Spanish but I didn’t and my mom speaks fluently but I don’t.”

“I would like to do something like that, I wish I was bilingual damn! It seems soo cool… So hopefully I can learn and … when I go to my family reunion be able to talk to people… I’m like the gringo of the family. When I show up, they are like, how did you happen.”

After stepping away from MMA in 2016, Rousey has since become one of the biggest names in the pro-wrestling industry. The 35-year-old is now under contract with WWE.