Matt Schnell became famous this past weekend after pulling off one of the greatest all time comebacks during a bout against Su Mudaerji.

Prior to the bout, Schnell was a controversial figure against UFC fans for choosing to be on the conglomerate’s side when it comes to the way athletes are compensated.

“I also think it’s woefully dishonest that Francis Ngannou’s running around acting like he only made $600,000,” Schnell said.
“I know for a fact he got pay-per-view points, he paid from Reebok, he got paid for this, got paid for that… He probably made — I’m not gonna say it, but way more than $600,000..”

But ahead of his bout Schnell – who was born in the states was potted coming in with a Korean emblem on his Venum hoodie. 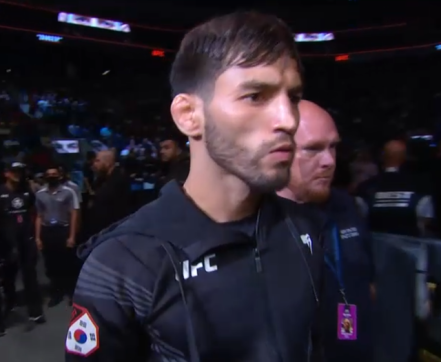 According to Schnell, he was born in Amory, Mississippi in the United States however several members of his family are Korean so he felt he wanted to give them homage. A while back he told UFC.com

In case you missed this unbelievable rally in the UFC yesterday

“It holds a special place for me,” he said of fighting in South Korea. “Two of the best people I know, my father and my grandmother, were born in Korea, so it’s always been a place I felt close to. But I’m an American citizen and I’m happy to go over there and be an ambassador, I suppose.”

Despite previous comments about athlete compensation, the first thing Schnell did upon the bout’s conclusion was ask for that money bonus. This is especially poignant considering that Mudaerji’s passed out body wasn’t even moved from his leg at that point.

Schnell is taking the publicity in stride and had told Ariel Helwani on the MMA Hour yesterday that he’d like to be called the ‘Thugjitsu fighter’ in future.