Joe Rogan has been podcasting since 2009 and is one of the pioneers in the lucrative space.

And while Rogan has reached new levels of notoriety thanks to his lucrative deal with spotify, MMA fans remember small key moments that shifted the trajectory of MMA fandom as we know it today.

One moment that nobody can shrug off is the time Joe Rogan systematically dismantled the UFC career of friend Brendan Schaub – on air.

Schaub was a frequent guest on the podcast and one of the original cast members of Rogan’s fight companion podcast, a subpodcast of JRE.

Rogan may have meant well but he was rather ruthless to Schaub explaining to his face that he’s not an elite mixed martial artists and implying that he’s risking his brain health if he were to continue competing.

Schaub appeared alongside Bryan Callen following TKO loss to Travis Browne. This was the second straight knock out loss for Schaub.

“When I’m in there. I don’t know, man. It was just, you know, critiquing the fight. I felt like I was doing good, mixing some things up. I was loading up on my punches the best. He used his reach better than he’s done before and earlier fights. He’s more patient not flying.”

Rogan added: “Had a nice wide stance, too”

Schaub explained: “We want him to come in and the wide stance is when you start I started to throw inside leg kicks, should’ve thrown a little more and I threw a head kick. And then some of the critique I’ve been getting is how on the ground could you let him get to mount and doing stuff. When he hit me with the uppercut, I was out of it.”

Schaub went on to claim that he recovered sufficiently and was ‘intelligently defending’ :

“So then I turn over, he hits me again. Then I’m fully I’m back to normal. I’m cool. He’s on top of me pounding. It’s doing zero damage. I’m not I’m not. There’s no blame on Mario Yakasami *(*Yamasaki).” 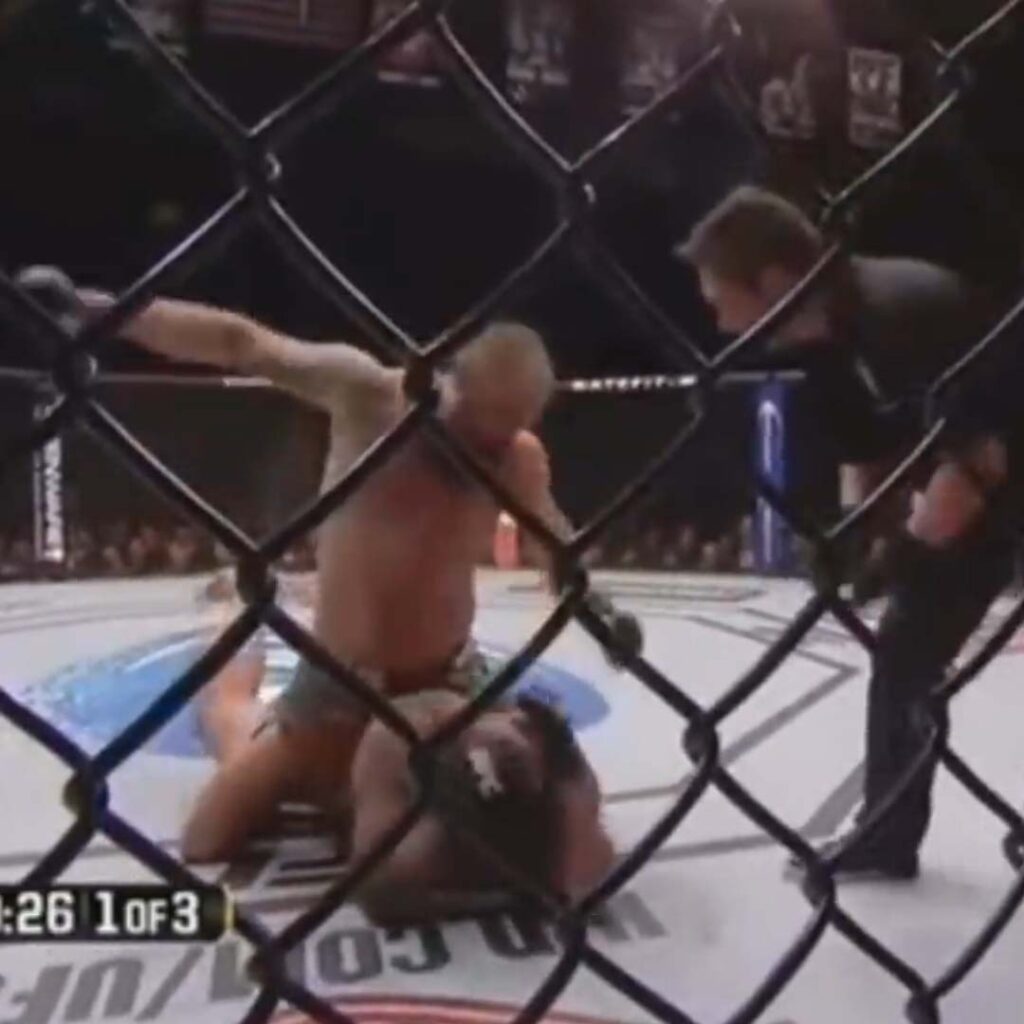 “So I just remember talking to Mario being like, do not stop it, man. And then he stopped it. And then there you go. Travis Brown.”

Rogan doubled down: “You know, he had to stop the fight, though. The way you were flattened out like that, you were just keeping your hands up on your head.”

“Defend but when there’s no damage. I think you have to take it case by case. I’m like, homeboy’s talking to me while defending himself. It’s not like I was eating punches.” – Schaub insisted.

And then he got right down to it:

“I don’t see you beating Fabrizio Werdum. You came into fighting fairly late in life. You’re a good athlete, you’re a strong guy, you’re a big guy. And you can do a lot of things because that and you can you’re very dedicated and you’re very disciplined and you get shit done. But there’s a reality of fluidity, of movement, of of of mechanical efficiency, of movement that happens when you get a guy who’s trained his whole life at a certain aspect of, of, of me, whether it’s wrestling, whether it’s kickboxing, whether it’s jiu jitsu, there’s a fluidity to their movement that you don’t really have.”

Schaub’s facial expressions through out this are amazing. He’s somewhere between in denial and being deeply hurt. He replied: “Straight up wrestling? Yeah, I think people would be surprised.”

Rogan wouldn’t budge: “Really? You think so? I think you’d be surprised. I think he’d f**k you up.”

“There’s a bridge between you and the very best guys in the world. And I don’t know if you can cross that bridge. That’s. That’s the reality of life. You’re a very good fighter. That’s not what the issue is.”

“The issue is, can you become a champion? If you can’t become a champion, are you comfortable with getting knocked out three or four more times over the next five or six years? You know, and that’s that is a possibility. It’s a possibility. It might not happen. You might be okay, but it also might happen. It might, it might happen two fights in a row.”

“15 minutes with an elite fighter. You can’t do that. Your brain doesn’t get better from punches. Werdum, Cain is another level than you.”

While the clip was publicly available at first on youtube, it was deleted fast and lives on in fan accounts on the internet.

The moment shaped Schaub’s career to date – with many insiders speculating that Rogan was a protector of Schaub in the comedy space because he felt guilty over the viral clip.

Be that as it may, Schaub did himself a service giving up MMA when he did. Soon UFC penned a lucrative deal with Reebok which nixed one of the significant streams of income for UFC athletes. Many speculate that Schaub is suffering from slurred speech and other cognitive deficits as a result of KOs he suffered.