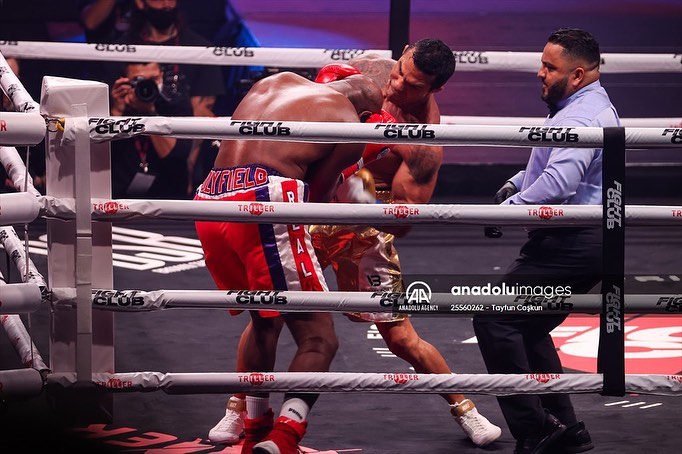 44 year old Brazilian former UFC fighter knocked out former Boxing World Champion Evander Holyfield (58). Perhaps the first hint of what would follow came when footage of Holyfield hitting the mitts emerged. In spite of looking in shape, Holyfield seemed to be struggling to catch up with the mitts and was somewhat delayed in spite of passing the eye test.

Vitor Belfort was happy with the result. Following the winner declaration he made quite a peculiar speech.

“You are a great patriot and we appreciate it,” Trump added when speaking to Belfort.

“Vitor, your stock was very high, but it’s even higher tonight because you beat somebody who is, I don’t know, I think probably one of the greatest of all time,” Trump continued. “There’s no question about Evander and we love Evander. I know Evander, and I’ve never seen that happen to Evander. I’ve been with Evander a long time and it’s just one of those things, you were really fantastic.”

Vitor’s own speech was a bit unhinged:

“We got $25 million dollars winner takes all,” said Belfort during his post-fight interview (shown above). “Hey, Jake Paul. Stop running from me man. I’m going to teach you a lesson. You can be my kid. You’re going to meet daddy over here at Triller. Stop running you little b—ch.’

Elsewhere on the card Anderson Silva defeated Tito Ortiz via KO. Silva won in a dominant fashion and it was clear he was still holding up.