UFC star Paddy Pimblett is not having a great day. On top of the weight cut, Pimblett caused a ridiculous wave of backlash when he tried to accuse Ariel Helwani of profiting off of MMA guys – while in company of UFC exec Dana White.

While Ariel Helwani is a professional journalist, Pimblett and White went out of their way to call him a profiteer and a content creator.

Helwani debunked their claims in an epic beat down and explained that he makes his salary – and that viewership numbers on youtube don’t play into his salary. Not to mention the fact that there’s no shame in actually doing your job.

Pimblett was also called out by fans for contradicting his own words. The lightweight contender got exposed for going back on his word.

Paddy ‘The Baddy’ Pimblett rose to greater fame following his third outing in the UFC back in July. He competed against Luigi Vendramini, Rodrigo Vargas, and Jordan Leavitt – all three bouts ended via finishes. The Englishman is one of the most famous UFC athletes at the moment. 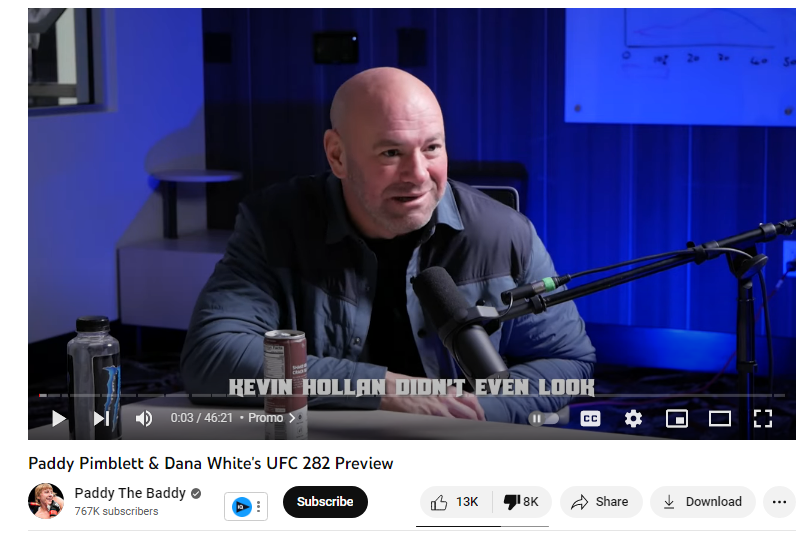 Pimblett is now set to face Jared Gordon at UFC 282 at the T-Mobile Arena in Las Vegas. It would be Pimblett’s third outing this year and will be his first time featuring on a main card at a major UFC event. Despite his spectacular performance and star power, Pimblett is still coming up and isn’t even ranked yet he’s in the co-main event of a PPV card.

Ahead of his bout at UFC 282, a video emerged on social media showing how Pimblett is reneging on his bold claims about the UFC. Prior to his debut in the UFC, Pimblett said that the UFC is not the only good promotion out there, and that there are many others who are similar. It’s even more ironic with him saying that he never changes in the interview.

The video was posted on Twitter and easily went viral.

“The UFC’s not the all and end all is it? UFC’s just… Just one brand. There’s multiple brands… I’ll never change. For anyone.” Pimblett said in an interview with the MMA Hour five years ago.

However, in another interview, after he joined the UFC, Pimblett was talking big about the number one MMA promotion. He said how the UFC is the only MMA promotion who could give him great success.

Paddy Pimblett used to say that he made more money outside the UFC. He became an ambassador for Barstool Sports and signed a seven-figure deal in 2020 after joining the UFC.

After Pimblett spoke up about the ridiculousness of his paychecks he renegotiated with UFC and got a significant paybump.