Jake Paul and ESPN commentator Stephen A. Smith recently got into a heated argument over the salary of UFC athletes.

UFC president Dana White has been under fire for a while now over public reports that UFC athletes are compensated with approximately 17% of revenue an event brings in.

Numerous UFC competitors, including heavyweight champion Francis Ngannou and former champions Jon Jones and Henry Cejudo, have criticized the organization’s president for failing to pay them what they are owed.

Paul has been at the forefront of calls for the UFC to pay its athletes closer to other professional sports. In mainstream sports athletes are typically compensated with 50% of the revenue an event brings in providing a comfortable cushion for them to retire once they reach a certain age. This has never been the case with UFC.

The former YouTuber-turned-boxer previously said that he would compete against Nate Diaz for free in UFC if White increased pay and provided healthcare.

On a recent episode of BS with Jake Paul, Stephen A. Smith and Paul discussed Dana White and the alleged underpayment in the company. Smith backed White throughout the exchange and said:

“You don’t like it, go find a different damn job to do. You got a decision to make because I got news for you… I have been in the ESPN for 17 years bro. They brought up a contract that I got three years ago. What about the first 14?”

“Because if companies win especially when they’re negotiating and they are promoting and they’re handling overhead, they’re taking the risk and they’re doing a lot of things. There’s a lot of complaints that I could have.”

“There’s a lot of complaints that a lot of people could have. Various networks, various professions, etc… But at the end of the day, it does come down to business.”

“Listen, there aren’t too many things you can talk s**t about the UFC about. If you look at what we’ve done with the business in the last 22 years, it’s incredible.”

And Emanuel used some very creative data skewering to make his point. For starters he explained that if this were true Conor McGregor would not be the most paid athlete on the Forbes list. 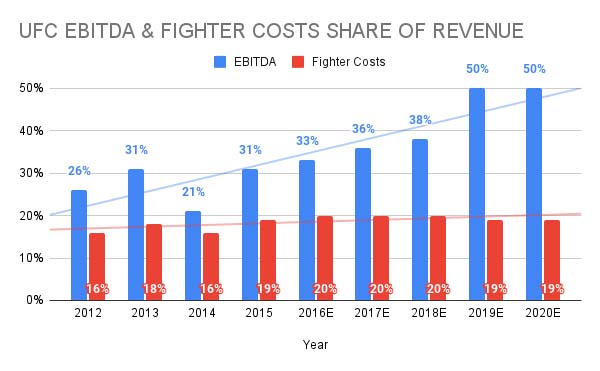 “They just did a recent study of the highest paid athletes. The number one athlete was a UFC fighter. They are making money from wrestling kits, paid marketing opportunities that we are creating for them with our sponsors, income for NFT and we are investing money in a performance institute to rehabilitate them, [focus on their] diet, etc. «

Well – this is a very creative of Emanuel. Of course what he fails to mention is that the majority of McGregor’s wealth this year came from a personal investment and not from the company – McGregor is estimated to have grown his wealth by a staggering 180 million dollars this year – just 22 are estimated to be from the UFC and the rest from selling the majority stake in his Whisky company Proper 12.