MMA fandom is something else. Besides the standard meme there’s also a rising number of profiles that try to joke with fake quotes. Ahead of UFC 283, one of these had made waves.

But sometimes UFC aces have to share elaborate reactions because some of these can get quite inflammatory. One such ‘meme’ surfaced in the fall out from Sergei Pavlovich’s victory over Derrick Lewis.

The meme in question featured Pavlovich along with a custom written ‘word cloud’. 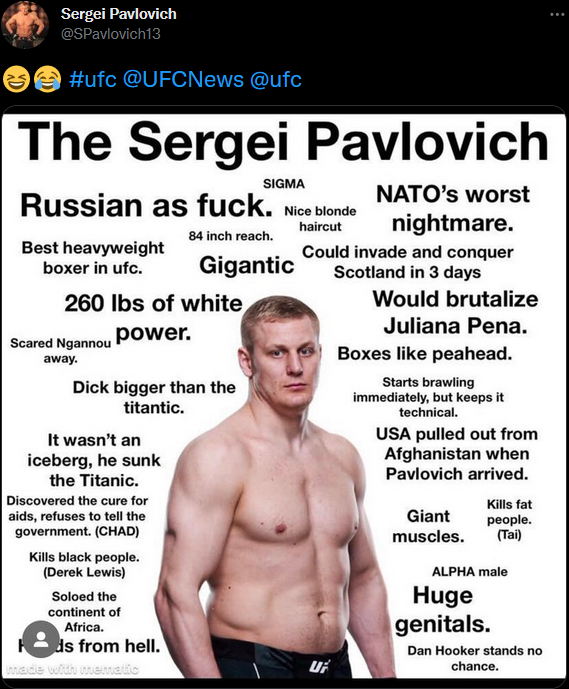 Pavlovich was just happy to be mememed and appeared to share the meme at first – or someone in his entourage did. Pavlovich does not actually speak fluent English and is commonly accompanied by a translator during UFC media day obligations.

Twitter was quick to react to the image and point out several of the unsavory captions:

And while the UFC isn’t particularly bothered by political correctness – Pavlovich was and issued an apology after the problematic language was pointed out.

“Due to the language barrier, I did not understand the weight of the things written about me. Posted by mistake and do not subscribe to the things said about me. The meme was not made by me. Peace for everyone 👊 #ufc” 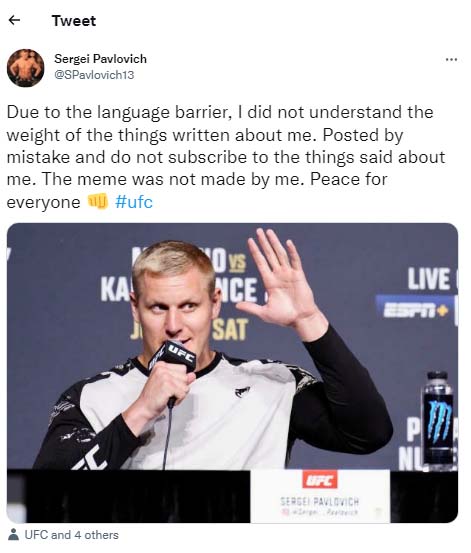 Amidst all the controversy, Pavlovich shared something that wasn’t previously known. Apparently he’s likely to return in April against Curtis Blaydes.

“I’ll show you what I’m f*cking interested in,” Rogan stated to Belal Muhammad during a recent edition of his podcast.

“What I’m interested in at UFC heavyweight: Pavlovich is the boy. Sergei Pavlovich, that motherf*cker, that’s the Russian Fedor [Emelianenko]. I mean, the Russian Francis [Ngannou] rather. He comes out guns-blazing on people, just like Francis used to.”

He continued, “That motherf*cker can bomb. He’s fast, very good, very good… The Tai Tuivasa fight was incredible. You think about Ciryl Gane going through that war with him, Sergei just put it on him. His boxing is f*cking tight man, really tight, real power punches, excellent technique. A big guy too, a big heavy f*ck. This f*cking dude is scary.”