UFC veteran Lando Vannata has revealed how he pursued a suspected house intruder with a revolver while barefoot and in subzero conditions. Vannata learned about a break-in at his neighbor’s house when he was resting at his residence in Albuquerque.

He grabbed his revolver and pursued the man as he tried to break into another house nearby. In a Twitter thread, Vannata detailed the dramatic happenings.

Vannata began with the words “Albuquerque is wild. Stay strapped.”

He wrote: “Last night around 12:30 I was laying on the couch and a ring alert went off on my phone, I long press the notification and see a guy standing in my driveway dressed in an oversized grey coat and beat up old jeans. I open the live video.”

“He’s walking across the street and climbing over my neighbor’s backyard wall. I jump into action. I run up to my front door, still observing the video as the character struggles to climb, grab my car keys and hit the lock button a few times hoping it’s enough to scare him.”

“He pauses, straddling the cinder blocks, looks at my car and then continues quickly over the wall, into the yard and up the staircase that leads to her balcony door. It’s 20 degrees[F, minus 6C] outside and I’m barefoot, in sweatpants and a [T-shirt] on my front porch yelling. “HEY F***ER, I KNOW YOU’RE UP THERE!” 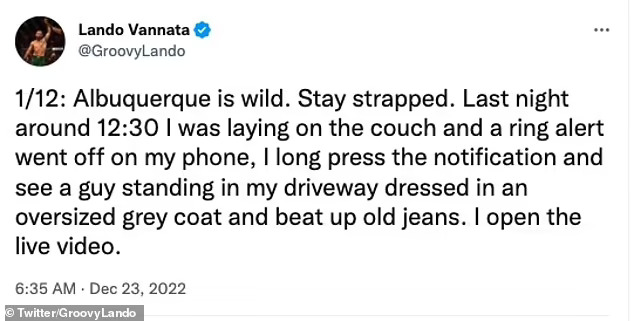 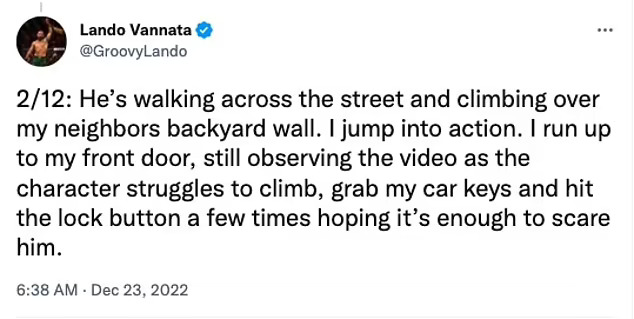 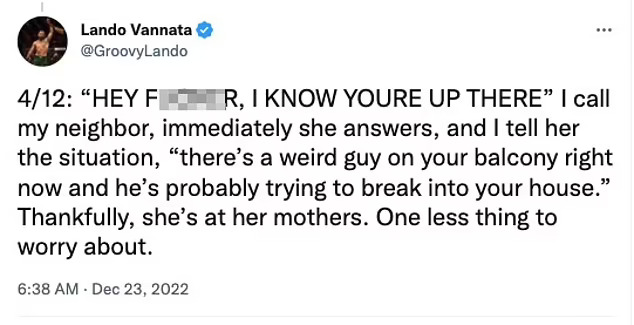 “I call my neighbor, immediately she answers, and I tell her the situation, “there’s a weird guy on your balcony right now and he’s probably trying to break into your house.” Thankfully, she’s at her mother’s. One less thing to worry about.”

“There’s only one way up and one way down that balcony, and I haven’t seen him since he climbed up, he must be hiding behind the walls. My neighbor calls the cops. I’m more the self-sufficient type. I turn around, walk inside, lock the door behind me. I head upstairs.”

“I grab my flashlight and just in case, my gun. Ready. But let’s assess the situation first. I step onto my balcony and shine the light across, looking for movement, nothing still. I yell out again “YOU BETTER GET THE F**K OUT OF HERE B***H!” Then I see him.”

“Walking across the main road outside of our neighborhood in the middle of the cold night. “COME BACK HERE AGAIN AND I’M GONNA F**K YOU UP!” He starts walking back my way telling me to do it, pauses and continues leaving. At this point the cops are called, I’ll be up all night.”

“Thirty minutes later they arrive and I head out to meet them. I explain to them the situation but to my surprise they’re here on another call a few houses down. They tell me to hang tight.”

“Another half an hour passes before two more cops show up for our situation. I’m only a few sentences into telling them the story when the original officers walk back over and interject. This little cockroach, they tell me, had broken into a neighbor’s house through the back door. A house with a husband, wife and two kids.”

“Thankfully they were able to physically push the worm back into the yard and lock him out. Then, he has the audacity to come check my car doors before attempting to break into the house across the street. He flees into a nearby shopping center where the police get a report matching his description.”

“The scumbag proceeded to beat up a man riding his bike before fleeing into the woods. I don’t know if the cops caught him when they went looking, but my my eyes will be peeled. If you want this s*** to constantly happen in your city too, vote blue.'” 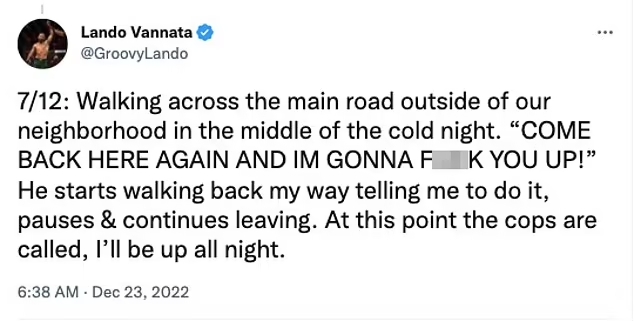 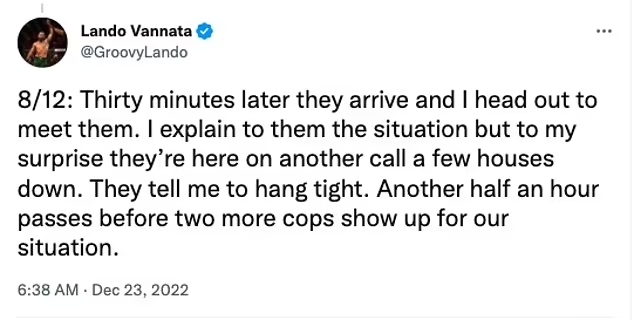 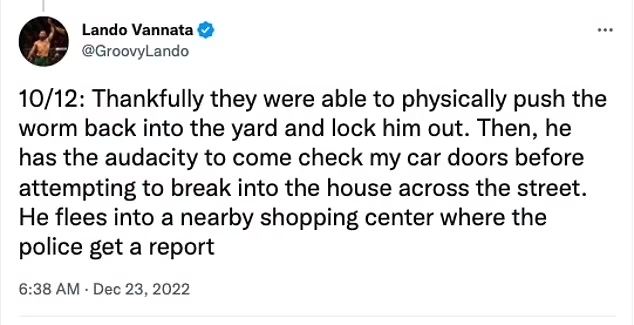 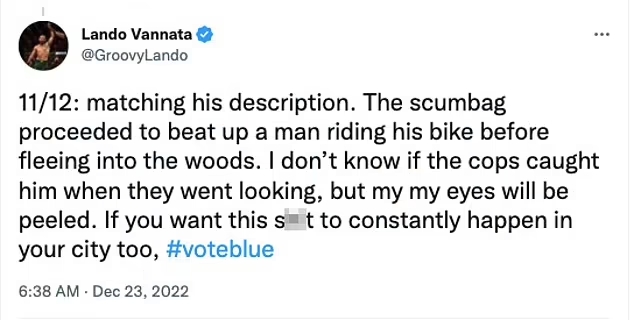 Vannata competes in the UFC’s featherweight class. He currently has a 12-6-2 record in mixed martial arts.