UFC lightweight Benoit Saint-Denis got one of the $50,000 bonuses for his performance during UFC Paris but he did pay quite a steep price to accomplish it with his big toe splitting in two against Gabriel Miranda.

Saint-Denis won his second bout in the octagon on Saturday night in the much anticipated Paris UFC debut.

He TKO’d Miranda in the second round.

However, it came at a price since he sustained a terrible lesion on his left big toe. Saint-Denis kicked Miranda many times, almost causing his left hallux to split.

Blood started to run out of the toe, but Saint-Denis persevered through the agony to win with a stunning stopping.

UFC fans were quick to comment on the gruesome injury, with one saying: “That looks like a piece of tuna on his toe.”

Another fan said: “Looks like salmon on some sushi.”

In his  press conference appearance, the Frenchman said:

“After a couple of kicks, it split in two, almost. It’s simply a game of fighting. You never have a perfect preparation. There are always small injuries.”

“It’s a part of life for athletes, so now, I will take time to heal it up.”

When Saint-Denis entered his most recent training camp, his toe was already damaged.

“I could not lift my toe anymore, but I wanted to fight. We did no surgery. It was OK, I just had a lot of times where my toe was going into the ground. It injured me a little bit, so I had to train with shoes.”

“Just after Niklas, I got surgery, but six weeks without any sports, ”
“It was the best and hardest camp I ever had, because obviously, three weeks, the first two weeks you feel like s***, because you haven’t trained for a long time.” 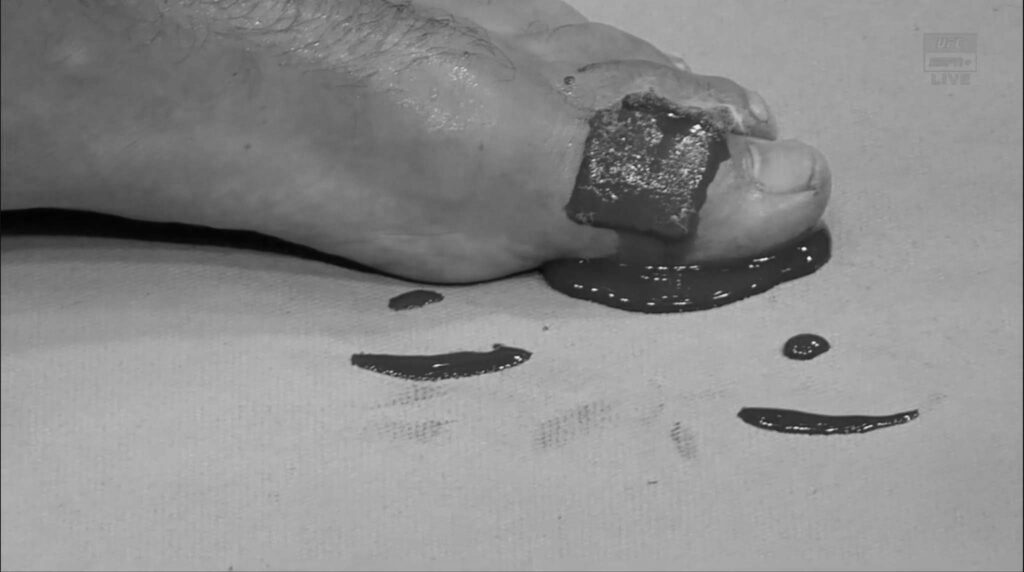 Saint-Denis’ UFC record since making his debut last October is at 2-1 after his victory over Miranda.

The full image is on the next page.