A number of UFC aces caught flak for supporting Andrew Tate through much of his controversy and even stuck with him despite human trafficking arrest. Among them are newly crowned UFC champion, Jamahal HIll, Aljamain Sterling and veteran Uriah Hall. One man who isn’t afraid to criticize tate is rising Welterweight, Randy Brown.

Randy Brown recently called out Andrew Tate fans or anyone who subscribes to his courses. Brown is scheduled to face Jack Della Maddalena next month at UFC 284. He recently made his thoughts known about Tate fans.

Brown mocked those who need to turn to Tate’s instructions for success and says that they’re “too far gone.” He feels like those who subscribe to Tate need a father figure in their lives. He tweeted the following:

“Not gonna lie subscribing to Andre Tates courses on “how to be a top G” and “how to get girls to like you” is weird as hell. If that’s where you’re at in life then you’re too far gone. Y’all really just need y’all fathers” 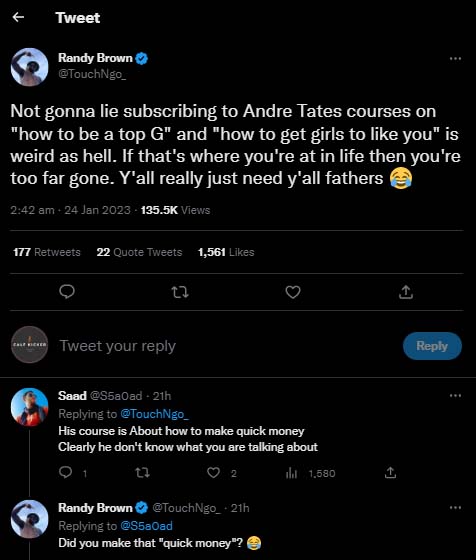 Here, he is referring to Tate’s online program, Real World (formerly known as Hustler’s University) which has modules on many walks of life. The institution has courses on freelancing, e-commerce, and many aspects of business.

However, it also has programs for building social skills, which Brown is referring to here.

Meanwhile, Tate, who’s still imprisoned along with his brother Tristan, continues to send out messages via social media and through his management.

He has made a couple of announcements on his Twitter after his arrest. For example, he gave out his email to his subscribers so that they can exchange messages. In a recent email to his subscribers, he talked about the harsh conditions in the Romanian prison where he’s being held. He says that the authorities are trying to break his spirit.

“I will send you my daily lessons from unjust imprisonment. They are trying to break me. Thrown inside a cell without light. Cockroaches, lice, and bed bugs are my only friends at night. When the guards bring me to and from the courtroom, I stay absolutely respectful. They try to pour hatred into my heart. But Please and Thank You stick with me at all times.”