Tecia Torres and Raquel Pennington are two of the prominent athletes in the strawweight and bantamweight weight classes. UFC stars have been dating for a while. They have launched an OnlyFans website in an effort to raise money for their “dream” wedding.

Both Torres and Pennington compete in the UFC,. Pennington is rated No. 5 at bantamweight, while Torres is ranked No. 7 at strawweight. After Pennington proposed to her girlfriend, the couple recently announced their engagement.

Following the announcement of their engagement, the couple made it legal in a Colorado courtroom. Torres made the request on social media, writing:

“Meet my beautiful wife! Just call me Mrs. Pennington. We made it official today. I married my greatest love. I can’t wait for these next chapters of life together baby.”

“We want the wedding of our dreams come fall 2023. You can help us make that dream come true and follow our journey by subscribing to our OnlyFans page.”

“Awaiting approval. Follow our adventurers, home life, behind the scenes, more of our personalities, and of course some cute pics.” 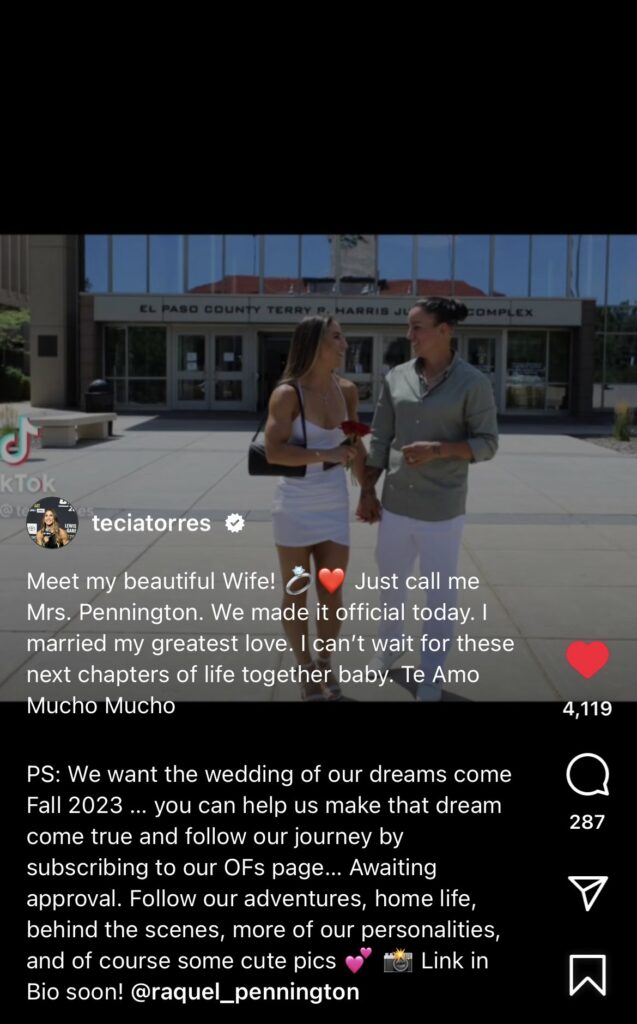 Torres was on a three-bout winning run before  her last outing, which she lost to Mackenzie Dern at UFC 273 in April by split decision.

Crowd funding is not a new concept for UFC athletes. According to what some of the active athletes revealed as much as 60% of their paycheck could be gone as soon as they receive it.

“After this win, 60 percent of my money is already gone. ”

Pennington has now competed 16 times since making her official UFC debut in 2013. She defeated Miesha Tate to arrange a showdown with well-known Amanda Nunes and came close to winning the division.

After losing to Nunes, Pennington has lately gone on a winning streak that began in June 2020. On the same card as her new wife, she most recently beat Aspen Ladd.

She will now search for her next challenge later this year. Despite making a total of 31 trips to the octagon together, it seems the couple cannot finance their “ideal” wedding.