After his tough victory against Calvin Kattar, Josh Emmett was no longer recognizable.

In a taxing five-round main event, Josh Emmett prevailed. However, the experience left him with scars. Emmett discussed the victory on Michael Bisping’s podcast while also showing off his horrifyingly swollen face.

Despite having two black eyes, wounds, and scars, he rejoiced at his sixth straight victory. Emmett, 37, hopes to next compete for the UFC featherweight championship.

On July 2, champion Alexander Volkanovski will defend his title against Max Holloway.

Emmett told on the podcast: “I want that shot. The No. 2 and 3 guys are phenomenal fighters. They fought the top guys, Max Holloway and Alexander Volkanovski.” 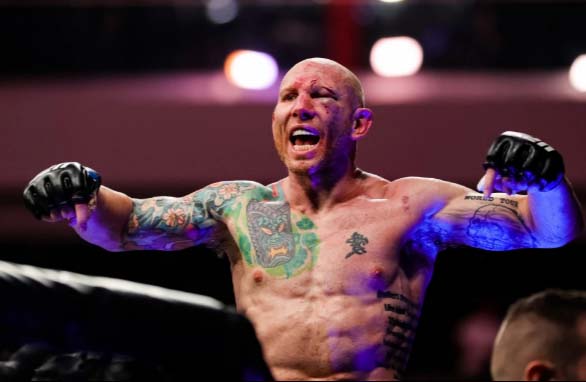 “We need some new blood in the division and I know I can compete with them. I’m the best featherweight on this planet, and I’m ready. I want to be sitting cageside in two weeks to see who I’m fighting next.”

Emmett added: “It doesn’t really matter, they’re both phenomenal fighters, some of the best featherweights of all time. But the way I do see it though, if Volkanovski wins, he solidifies himself as the GOAT for now.”

“If Max were to win, I know Volkanovski won the first one, and it was decisive, but the second one was a little controversial. It was super close, it could’ve gone either way.”

On the other hand, Calvin Kattar thinks he should have won the fight against Josh Emmett instead of losing by split decision. Kattar claimed he dealt more damage each round of the five-round battle, which should have been sufficient to earn him the win according to the scoresheets.

Despite being understandably dissatisfied with the result, Kattar still extended his congratulations to Emmett on his victory. He said that he will watch the fight again when he got home to figure out what went wrong and why he lost by a split decision.

Kattar said, “Just that I thought I did enough to beat a high caliber opponent. Just have to go back, check the tape, see what’s up but really kind of just got more questions than anything.”