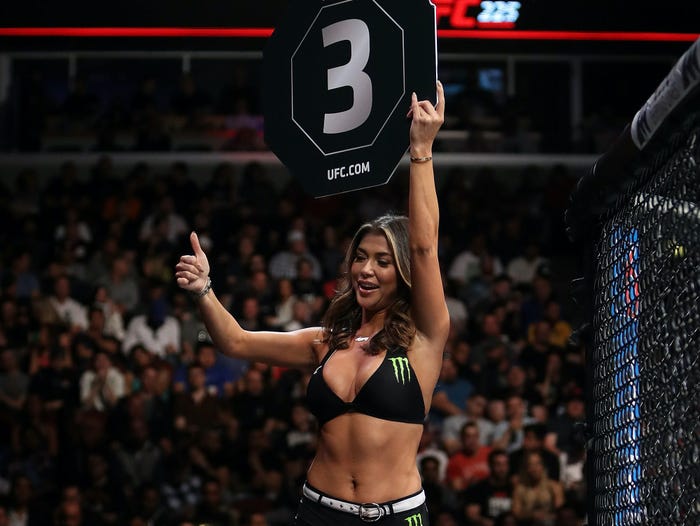 Khabib Nurmagomedov has never shy to express his opinions. To sum up, Nurmagomedov doesn’t believe women should be fighting and he believes the ring girls should be fired as they have no utility. In fact Nurmagomedov is so against them he went as far as to call them “the most useless people in martial arts.”

“These [women] are passing by and showing people that it is the second round but no one looks at the [card],” Nurmagomedov said, according to the MMA website Bloody Elbow. “I feel uncomfortable with my father.”

He continued: “I am not against it but if you want to do it, don’t impose it to me, do it aside. There are designated places for it.

“I think we must not mix all of it. This is my private opinion. We develop sport there, first of all. There should be some show elements, for sure. People want to come and watch, it is interesting for them. I think to mix it is incorrect.”

“Look, I don’t want to offend anyone,” he said. “Ring girls are the most useless people in martial arts. What is their function? You can show that it is the second round on the screen.

“Do they develop a sport? Or they help people to see that it is the second round now? What are they doing? Tell me, please.”

And whereas you can agree or disagree with Nurmagomedov on some beliefs dictated by his faith – UFC 267 raised an interesting question. Why is the UFC paying for ring girls if they can’t afford a decent referee?

And before you get all up in arms about it – typical referee does the job mostly as a labor of love. They make between $1700 and $5000 (if the referee 3 fights) for a night’s work. And the work isn’t steady because UFC cards move all over the globe all the time, so a likelihood of getting consistent work drops down significantly.

But in spite of the critics Ring Girls aren’t ready to throw in the towel just yet – one ring girl who has been with the company since 2017 recently responded.

“We aren’t allowed to say how much we make, but I promise you it’s not as much as the fighters,” Brookliyn Wren told The NY Post. She doesn’t understand the snubs. “We don’t take away from the fighters. Everybody loves Vanna White. No one called her useless.”

From the very same article came another interesting revelation:

None of the UFC ring girls interviewed by The Post will divulge their pay, but they all say the gig is lucrative — and a springboard.

Wren was also adamant that their function is “bringing a little peace to the violence”. Can we get a LOL?