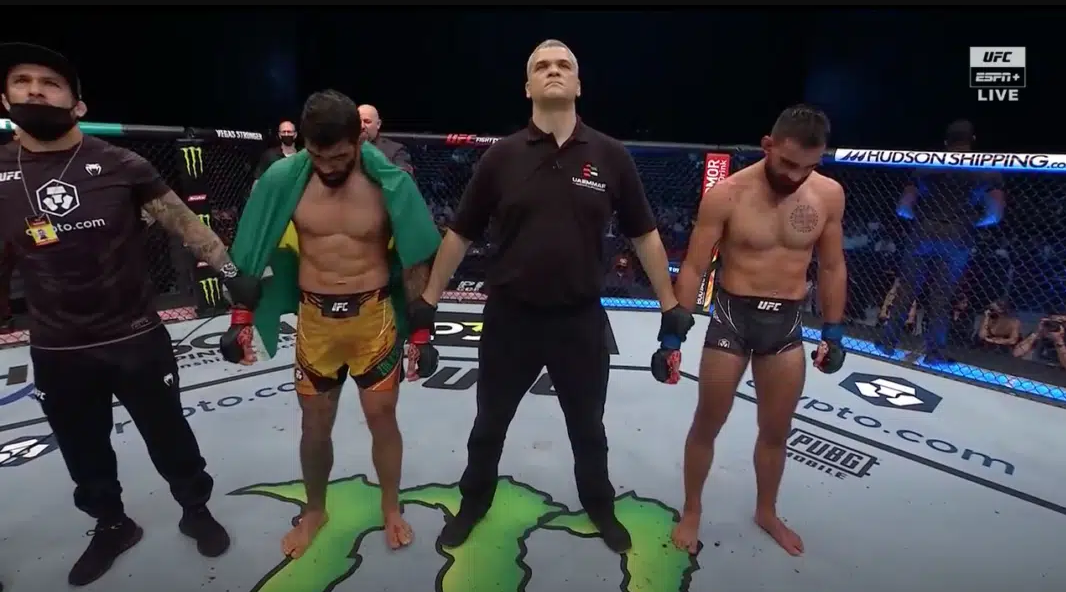 Referee Vyacheslav Kiselev was removed from his post as a referee after failing to stop Elizeu Zaleski dos Santos vs Benoit Saint- Denis. To give you an idea as to why the ref is bearing the brunt of the rage the fight was scored 29-26 by all try judges and Dos Santos was awarded the decision victory.

While there’s a Herb Dean meme going around about him letting fighters “be the warrior” – there’s more than just not stopping the fight to blame Kiselev for.

In the 2nd round Dos Santos wobbled his opponent who backed up to the fence. There dos Santos rained punches and knees on his opponent but to no avail. The brutal punishment went on and on. With two minutes left in the round Saint-Denis even committed a well known no-no in a fight and turned away from Dos Santos. Dos Santos was very frustrated looking at the ref and gestured with his hands the confusion that was going through his mind.

This fight prompted two former fighters turned commentaries to step up. Both Cormier and Paul Felder yelled from the cageside broadcast table for Kiselev to stop the fight. Another on looker is longtime respected referee Marc Goddard who was also confused as to why the fight isn’t being stopped.

To Saint-Denis’ credit it wasn’t entirely one sided as he would try and throw a punch every now and then. But this was by no means enough to keep the fight going.

UFC has pulled referee Vyacheslav Kiselev from his other #UFC267 assignments due to his performance during the Zaleski dos Santos-Saint Denis fight. pic.twitter.com/lt04N8b6ax

UFC has pulled referee Vyacheslav Kiselev from his other #UFC267 assignments due to his performance during the Zaleski dos Santos-Saint Denis fight. pic.twitter.com/lt04N8b6ax