Hall is 38 years old and has a professional record that consists of 17 victories and 11 losses.

Despite a long career in MMA it’s more than likely he’s not financially settled in his life. This is why he’s trying to make a boxing date with Jake Paul happen after all. Recently he slammed ring girls explaining they’re paid better than UFC Athletes.

Luciana Andrade has self reported working as a ring girl for the last 8 years and took offense at comments Hall made saying:

“In these [almost] 8 years of working as a Ring Girl, I never once got involved in any controversies but I feel we need to address this nonense about our pay and all the hate that comes from it.”

“I have a lot of respect for the athletes and the MMA community, with some of my dearest memories being related to all these years on the road. UFC has given me the opportunity to work and travel to places I never thought I’d be able to visit, so I will never take it for granted.”

“With that said, being a ring girl is a fun side gig – not a full time job. So, naturally, all these numbers you see online are far from the truth. We’re not competing for a better pay – we’re simply doing our jobs as brand ambassadors, which is what we were hired for.”

“If it’s not something you would do – that is totally fine. But you do need to respect other people’s life and career choices. When some [usually with more voice and visibility] spread disinformation about our role and pay, a lot of hate and misogynistic comments come our way.”

“We all have a life outside of MMA – if people make money through other gigs (and they do), that’s completely separate and should not be confused with what you are fighting for. We are all hustling.”

“Luckily, UFC and most MMA fans are respectful and supportive of this entire community (& consider us part of it). Being called dumb, useless, #%@!$, etc, (although not cool) over the years doesn’t define us but if you’re one of those…well, I guess it’s time to grow up. No more.”

Andrade is likely referencing the fact that many of the ring girls use the platform UFC provides and opt to monetize it by running their own Only Fans pages. This is perhaps way more lucrative than the actual gig.

Previously there were reports about (UFC ring girl) Brittney Palmer having a more significant net worth than UFC 274 headliners Justin Gaethje and Charles Oliveira.

Brittney Palmer isn’t the most mysterious face when it comes to MMA. Palmer debuted in the UFC in 2011. She won the Ring Card Girl of the Year award in her first year.

Palmer also has an OnlyFans account, where she seems to earn a lot of money by sharing images.

Before becoming a famous ring lady, the 34-year-old beauty made her money via modeling. Palmer was on the cover of Playboy in March 2012, even though she is most known for her job in the UFC.

When we consider the pay gap between Palmer and the best lightweights in the UFC, it’s easy to see why the athletes expect more. Palmer has a net worth of roughly $5 million. By comparison Jorge Masvidal’s career earnings are estimated to be under $4 million.

Regardless of the fact – rather than cannibalize the UFC athletes need to come together if they really want to not seem disposable a stream of 10k to show and 10k to win contracts has to end sometime. Due to the nature of the sport it’s really hard to imagine the athletes would ever form a union but one of Biden’s recent policies makes it so that contractors are basically considered employees so some marginal improvement in the pay scale might be on the horizon. Story developing 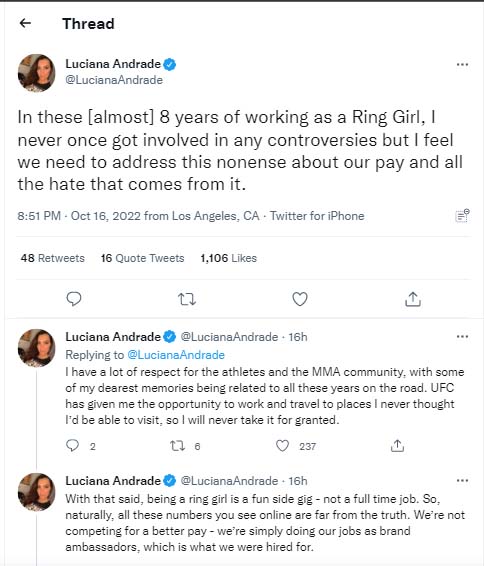 Andrade previously fired back at Khabib Nurmagomedov who had religious issues in reconciling their role in MMA.

Back then she penned an airily similar response on twitter saying:

“People spend way too much time and energy arguing over others’ lives and choices.”

“UFC is both sport and entertainment, and brand ambassadors (aka ring girls) serve not just to ‘inform rounds’ but to represent the brand when and where needed. I’ve been proudly/happily working as an OG for almost 8 years now and can only thank UFC for all the doors that keep being open to me.”

“I also LOVE to keep proving haters wrong – yes, it’s possible to be a model while also studying, working and investing in other areas. I had people calling me stupid (remember the ‘do nothing b******’ era?”

“Women supporting women didn’t always exist in this industry while I was literally using this opportunity and income to pursue a Masters in Law, learn other languages, improve myself. Sometimes you just have to laugh.”

“If one thing, all this exposure, free hate and lots of judgement made us all ‘grow’ thicker skin – it’s 2021 and I refuse to let people *try to* control my life, personal decisions and/or tell me what I should do for a living.”

“Also: no, we do NOT make more than fighters.”