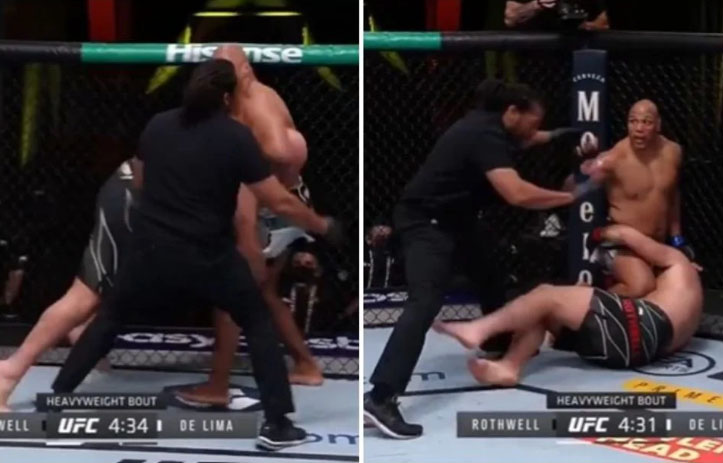 Herb Dean’s tenure in the UFC might be coming to a close. In his latest flop – Dean was observed during Rogerio de Lima vs Ben Rothwell stopping the fight – and then pretending as if nothing was happening.

Herb Dean briefly stops the fight and then let’s it continue then remembers he stopped the fight. He’s lucky @danhardymma wasn’t there ?♥️ #Unreal pic.twitter.com/xNKAgNMuYT

Cmon. He stopped it, then thought twice, hoped it would slide by, de Lima stopped and he’s like, Yeah, it’s over, man.

While everyone including UFC boss Dana White was in agreement that Dean had botched it – many are quick to point out he has a history of doing this.

What the actual fuck? pic.twitter.com/mgryqywQJi

This one was kinda funny, so I might let it slide. pic.twitter.com/F7iAL3nztn

UFC president Dana White addressed Dean’s actions and called for him to “pull the trigger” instead of hesitating.

“Herb needs to stop touching guys unless the fight’s over,” White said in the post-show press conference.

“He goes in and grabs him by the waist and then decides oops.

“Don’t touch ’em unless you’re going to stop the fight. When they played it back in slow motion, he’s kind of dancing, like he doesn’t know what to do, if he’s going to jump in or not jump in.

“I like him personally, he’s a nice guy but he’s got to stop touching people until he’s ready to stop the fight.”

One interesting sidenote is that former UFC commentator Dan Hardy believes him yelling at Dean is one of the reasons his employment was terminated.

In addition to these Dean was also the one that failed to stop Ortega vs Volkanovski in spite of Ortega being unable to answer any questions accurately.