Tulsi Gabbard has had an interesting trajectory in her career. Gabbard was the first Hindu member of Congress and also the first Samoan-American voting member of Congres – as the Democractic representative of Hawaii. Since then Gabbard has even endorsed BJ Penn in the GOP race for governor Hawaii. Sadly Penn was the runner up, losing to former governer Duke Aiona.

But regardless of that Gabbard and newly crowned UFC strawweight champion went on Foxnews to talk about one of the hottest topics as of late – trans participation in sports.

“I’m so thrilled to hear what you have to say. Because this isn’t an idea for you. You have been a pioneer in the sport of mixed martial arts and you fought against men. What does this mean, especially within the field that you’re in?” Gabbard inquired.

“Well, this is a very important issue for me. And it’s one that’s been really popular in the media lately. I want to preface by saying that I do support people’s right to be who they want to be. And I think inclusion is important. But with that being said, I feel that fairness and safety and sport is more important. And you know, although with fighting there’s with combat sports in general, there’s an inherent risk, but just as we don’t allow PEDs, because it gives people an unfair advantage to inflict damage on on their opponent. I believe that coming into our sport with a physiological advantage does the same.”

Gabbard went on to share:
“I had a chance to spend some time with those who are competing in swimming and college and volleyball and and they were very concerned about the unfair biological and physical advantage that biological males have when they’re competing against them and obviously taking away a lot of opportunities that they see. So that speaks very clearly to the unfairness aspect of it. But as a Mixed Martial Artist in your sport, there’s a lot more that’s at stake here.”

Esparza was unapologetic and insisted:
“I believe when it comes to safety, we need to have science prove beyond a reasonable doubt that there is no advantage because we’re, we’re in the danger business, we’re in the fight business and we can get hurt out there. And, you know, I’ve seen some recent studies that do show that, you know, even up to two years of hormone therapy, there’s still an advantage. So, you know, taking away opportunities from girls, such as scholarships, paydays, you know, just positions and victories is just unfair. And, you know, like I said, until the science can prove that it is fair, I don’t think they should have trans athletes in female sports.”

“And as a pioneer of this sport. You know, I am familiar with the battle for inclusion, you know, I fought myself to through so many challenges, you know, just to get where we are today, not only in mixed martial arts, but in wrestling in jujitsu. ”

Considering she was mentioned by name, Fallon Fox responded. Fox tweeted saying:
“Carla Esparza brings up “recent studies” she says prove that trans women have an advantage even after 2 years of HRT. However, in my case, I didn’t fight pro MMA until almost 6 yrs after HRT and surgery. Long after that time frame.” 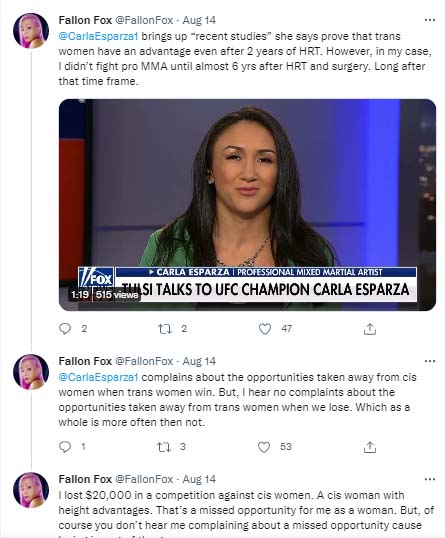