Tony Ferguson replaces Khamzat Chimaev against Nate Diaz. Chimaev will square off with Kevin Holland instead.

So many things happened in the lead-up for UFC 279 event this Saturday night.According to reports Chimaev confronted Kevin Holland who made a provocative video about him, saying that he will shave Chimaev’s beard. Chimaev confronted him and allegedly got kicked in the chest.

Holland bragged it’s this move that prevented Chimaev from cutting weight as usual.

‘Ran into Khamzat Chimaev He was hanging out at a restaurant for hours drinking sparkling water and eating the night before weigh ins and now Khamzat misses weight . I was worried all night about this when I saw it.hope the fight still happens tomorrow .’

Ran into Khamzat Chimaev He was hanging out at a restaurant for hours drinking sparkling water and eating the night before weigh ins and now Khamzat misses weight . I was worried all night about this when I saw it.hope the fight still happens tomorrow . #ufc279 pic.twitter.com/CMrFSxxtxO

The previous day, Chimaev appeared on Cormier’s ‘show’ and explained he was at 85kg (187lbs). 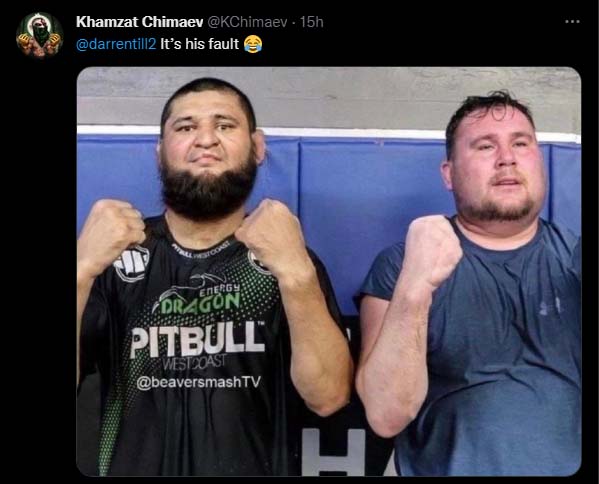 Besides Chimaev, the heaviest UFC competitor Chris Huggy Bear Barnett also missed weight. This was only the 2nd time in the promotions history that a heavyweight missed weight.

Chimaev rubbed everyone the wrong way opting to be unapologetic. During the first weigh in session, he stepped on the scale uttered ‘That’s not bad’ once the official announced he’d missed weight by entire 7lbs.

He was asked to step back to provide a picture on the scale, he begrudgingly did so flipping off the media.

This set off a series of negotiations with the UFC scrambling to save the day. As per Ariel Helwani, UFC CFO Hunter Campbell saved the day negotiating the 3 big changes. Ferguson and Diaz, Chimaev and Holland and the undersized Li Jingliang against Daniel Rodriguez.

UFC president Dana White explained that due to health reasons, Chimaev wasn’t allowed to continue cutting weight by the doctors.

“If you saw him yesterday, he was very lean already and he should have come in on weight. He started to cut weight and he started locking up and cramping and all the things that are from a bad cut. Unlike 10 years ago, we send in a doctor and they determine whether he will keep cutting weight and the doctor told him he shouldn’t.” White told ESPN.

Many fans believed the UFC had played a part in this reshuffle. There was even speculations that this is an attempt to auto extend Nate Diaz’ contract.