Trans MMA fighter Alana McLaughlin certainly electrified the MMA community. For those of use who have spent time in the community, it’s a surprise when there’s an unanimous understanding about a topic. After all, UFC’s athletes aren’t even all supporting better pay.

But the case of Alana McLaughlin seemed to unite a lot of the voices in the MMA community. From the biggest gentlemen to the biggest rubes – active mixed martial artists do not think McLaughlin should be allowed to compete with women.

Demian Maia is typically measured and not attention hungry. But the case of Alana McLaughlin got to the Brazilian legend and he ended up giving a statement on the matter.

“I think it’s absurd for you to put a person who was born a man to fight a woman. I’m going to talk about my sport, which is fighting. The person (who faces the trans athlete) will get hurt. There is no comparison. ‘Oh, but she started taking (female) hormones early on.’ Does not matter. The development there… And it’s not prejudice, none of that.”

Of course, many others were way less polite. Including resident loud mouth Sean Strickland.

“Change your name, call yourself a woman… but you’re still a fu****g man, get out of women’s MMA, coward,” Strickland wrote on his Instagram story. “This is why the athletic commission is useless.”

Recently McLaughlin trolled a McGregor fan online and outlined why a potential match with Sean Strickland would be out of the question despite the fact that she’s looking to compete again. 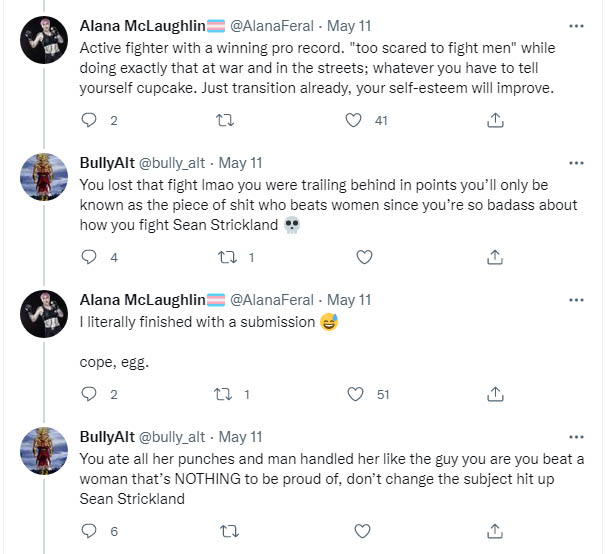 McLaughlin went on to add:

There you have it folks – a competitor who believes that her special forces background gives her the edge up against number 4 ranked  maleUFC Middleweight – but at the same time wouldn’t go up against a heavier female.