A lot was said in the lead up to UFC 271 co headliner between Tai Tuivasa and Derrick Lewis. The rivalry wasn’t aided by the fact that Tuivasa was facing Lewis in his hometown of Houston, Texas.

“I can’t do nothing like that. Nah,” Lewis said regarding Tuivasa’s shoeys. “I’d say I’d take my cup off and drink beer out of that. That’s as far as I would go”

The Australian Tuivasa on another occasion also expressed his interest to do a similar stunt, even giving it a name, ‘cuppy’.

“[Derrick Lewis] can throw [his cup] to me when I win and I’ll do a ‘cuppy’ out of his ball guard then.” Tuivasa told the media on UFC 271 media day.

The press conference even featured one of the weirdest questions of all time.

“Derrick, I got to ask, mate. Out of the whole heavyweight division, whose cup would be the worst to drink from?” asked the guy.

Lewis laughed at the guy’s accent for a bit before realizing that he’s serious about the question.

“Who cup? Say that again” Lewis asked the guy back.

“Coop? [Laughing] … aw man, what the hell? Nobody. I wouldn’t like to drink out of nobody cup. I’m sure we all fired it, so I’m pretty sure everybody got musty n*ts, it’s all at the same level. So no, nobody.” answered Lewis.

The guy seemed to really interested in that question so he insisted once again.

“One‘s got to be the worst than the other then.” asked the guy again.

“I don’t know, I’m not watching all these guy’s diets so I’m clean, so I’m probably the cleanest fighter they could drink from. Really.” Lewis added.

If someday there would be a hall of fame for the worst question ever, this should be on the first ballot.

But when all was said and done it was time to fight. And at the fight Tuivasa lasted through the high intensity offensive Lewis provided in round 1 only to knock out Lewis with a savage elbow in round 2.

This angle is insane pic.twitter.com/AVfPt19jDM

Very quickly after Tuivasa was announced the winner Lewis departed the cage. In fact during the post fight interview.

But this doesn’t mean he was a sore loser about it. Shortly after the two were photographed together exchanging pleasantries. 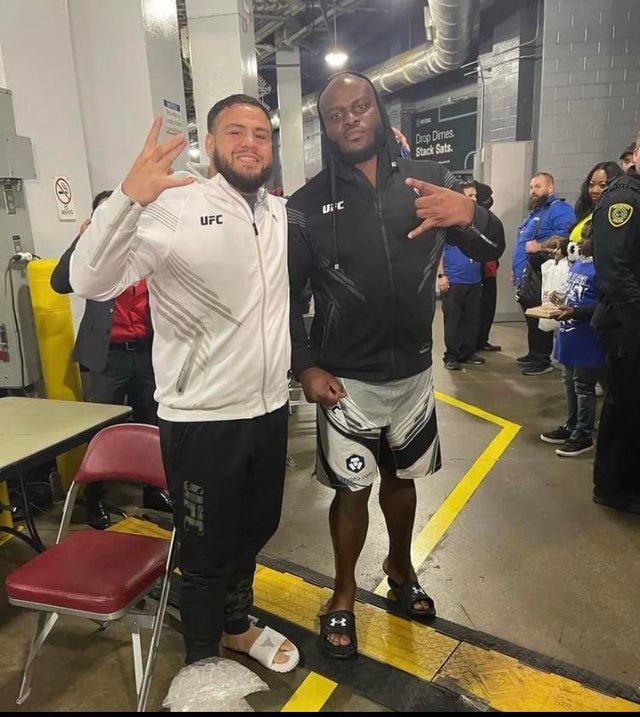