There’s been a lot of talk about the Dana White NYE scandal as of late and it’s been pretty revealing. A number of UFC aces came to Dana White’s defense despite the fact that White himself apologized for the behavior and said there are no excuses.

Sean O’Malley never said that Dana White was right to strike out at his wife on New Year’s Eve. However, he did add that he understood the UFC president’s possible response to his wife smacking him first.

Sean O’Malley addressed the incident during a segment on his BroMalley show.

“She hit him first. It was a nice counter. She should have kept her hands up. You know what I mean? Little head move. If you’re going to slap, you’ve got to be ready to slap.”

When dealing with issues that are this controversial and include prominent figures, commentary may be readily distorted in the media. Sean O’Malley voiced his displeasure with the MMA media when multiple outlets covered his remarks by taking them out of context.

O’Malley also retweeted several comments from fans who criticized an MMA outlet alleging he was taken out of context. 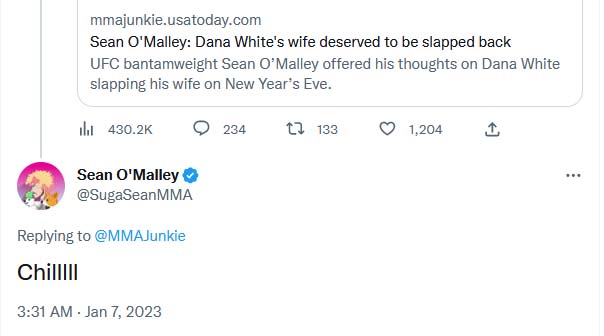 O’Malley also retweeted a number of fans who supported his take that he was taken out of context.

”new low for you guys here. Completely out of context and misleading. Embarrassment.”

Admittedly, that headline might be overstating the facts but it’s not really a stretch considering what he had said.

This isn’t the first time O’Malley is trying the ‘fake news’ approach. Last month he received a phone call from the stem cell clinic he visited. They were displeased he inferred he had an improper relationship with the doctor who administered the therapy into his nether regions.

His account of the incident as told to Michael Bisping varies from what he went on to claim on his own podcast.

In a later podcast O’Malley admitted that clinic had called him and went on to do a 180 on his story: