Nate Diaz just concluded his decade long run in the UFC. Diaz had won by submission against Tony Ferguson to the delight of fans around the globe. But there were many comments questioning the shape and tactics they utilized while the bout was on.

Many onlookers commented that this was like watching their uncles at thanksgiving considering that Ferguson was constantly spinning and Diaz was catching his breath by the fence left and right. 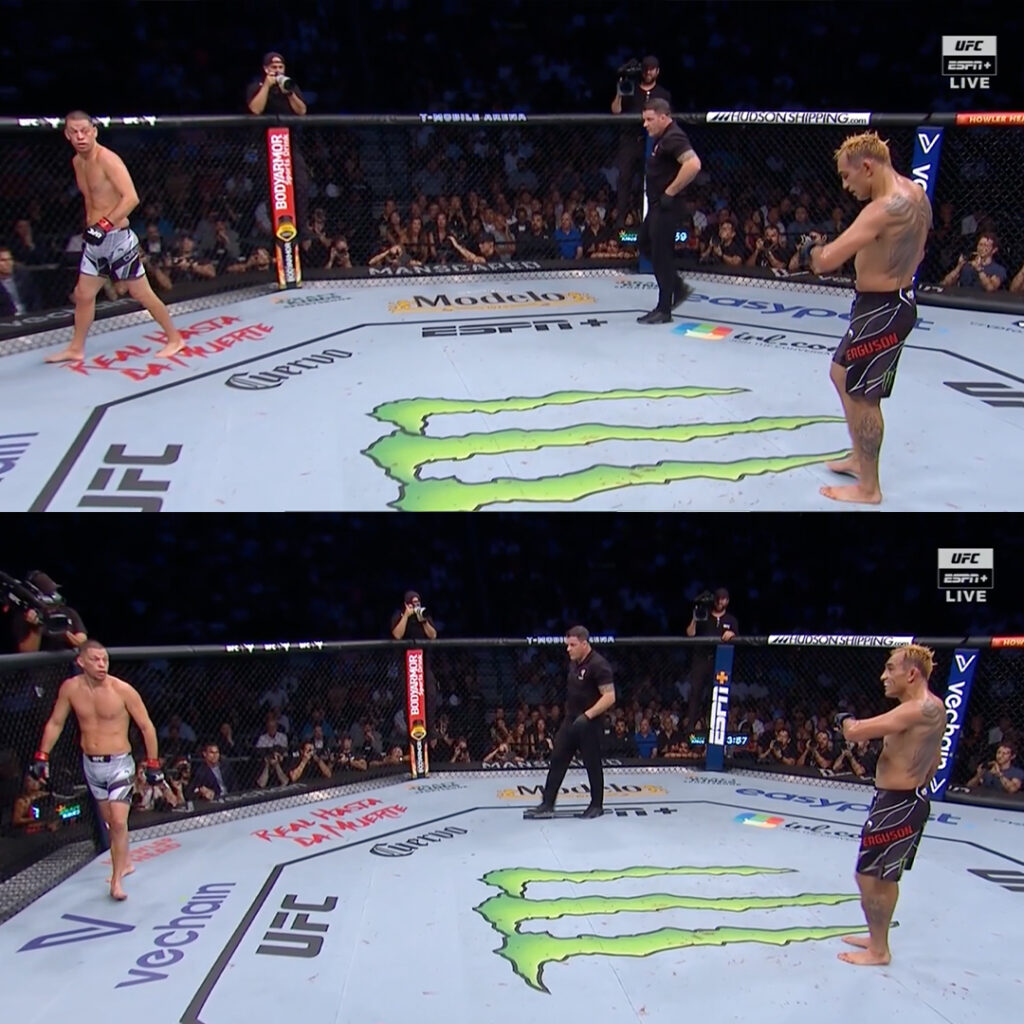 Referee Marc Goddard has provided his explanation for why he did not step in during Nate Diaz and Tony Ferguson’s ‘breaks’ at UFC 279.

Ferguson and Diaz exchanged blows back and forth throughout the whole match. Diaz made an unsuccessful effort to influence Ferguson’s thinking by using his usually unusual strategy. 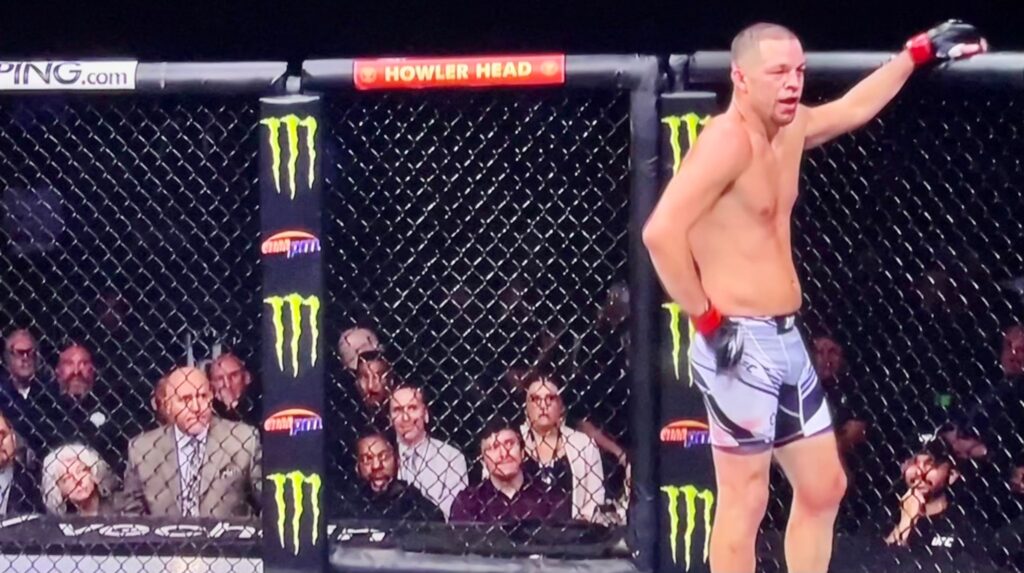 Diaz shook his head and rested against the cage on one particular occasion, seeming to fire up the audience. Goddard pushed Diaz to engage and the bout resumed undisturbed.

Diaz used a guillotine choke to finish Ferguson in the fourth round. Since he is now a free agent, it is doubtful that he would sign with the promotion again.

Goddard didn’t think about giving Diaz a severe warning or stopping the action despite his inactivity and ridicule. He recently responded to a fan asking whether he ever thought about ending the main event due to Diaz’s antics. 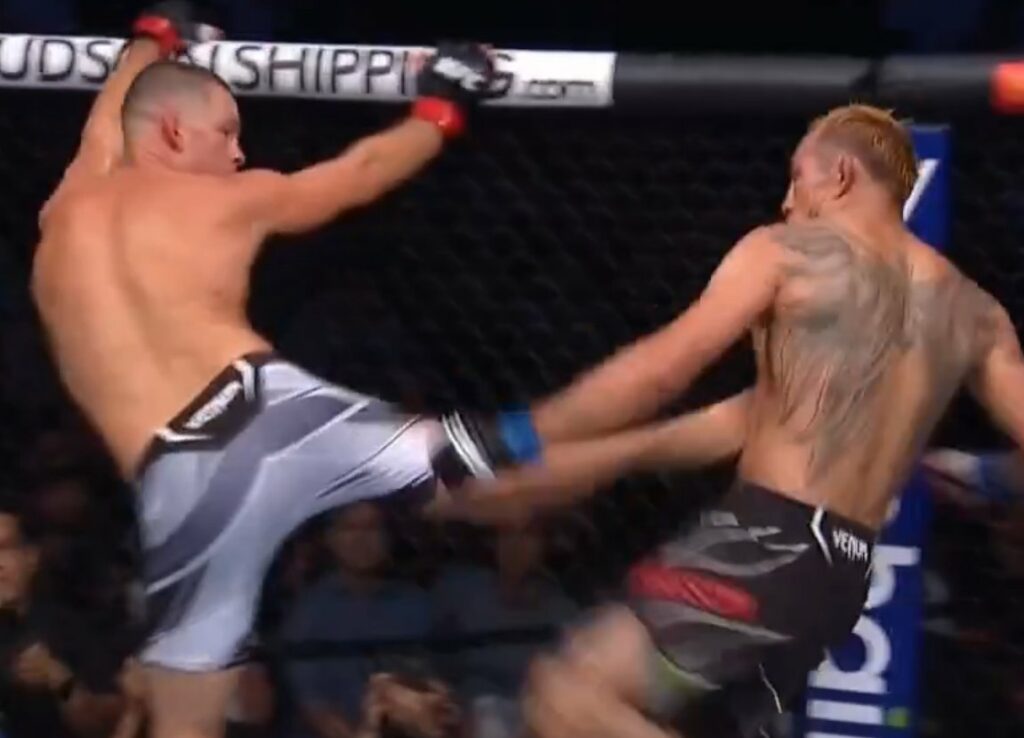 Goddard said: “No no! Categorically not. It was just a little Diaz gamesmanship! A couple of words & we were back at it! You have to read sometimes & not take things to literal. Very happy for Nate, nothing but respect for both him & Tony. All good.”

No no! Categorically not. It was just a little Diaz gamesmanship! A couple of words & we were back at it! You have to read sometimes & not take things to literal. Very happy for Nate, nothing but respect for both him & Tony. All good. https://t.co/4jcKXilYO6

Goddard is recognized as a solid referee that applies the rules meticulously. The tempo ramped up as soon as words were exchanged between himself, Diaz, and Ferguson.

Rogan delivered an all time classic interview with Diaz in the end:

I’m here with the winner, Nate Diaz, ladies and gentlemen. How about a round of applause for a legend? Nate, it was a world fight between two real veterans.
What was it like coming into this fight today? After all the chaos of this week, particularly yesterday.

Diaz: A full blown, full blown wrestling fight camp? I didn’t do no boxing, so we made that happen.

Rogan: What what did you think? Like what was going through your mind when Khamzat came in so overweight and then the negotiation is to take this fight.

Rogan: Was there any concern whatsoever about switching opponents?

Diaz: No, I’m just here to get my job done. I had one fight left. I told him. I told him after not letting me fight, like, forever. Like, give me anybody, you got. And at least I got a worthy OG representative to do it on.

Rogan: Absolutely. Absolutely. Nate, this was the last fight on your contract. What happens now? You obviously loved by everyone, and we would love to have you stay around. But what’s in your mind?

Diaz: All I know there’s been a love hate relationship with me and the UFC , the whole time I’ve been in this f*cking in this organization. But at the end of the day, I love the UFC. Shout out to Dana White, Lorenzo Fertita and Hunter Campbell for giving the opportunities and the platform the whole time. For everybody and for myself, I feel like I’m the most. Right now, I feel like I’ve had the longest career in the UFC and I’ve had the most successful one and everybody, and I outdid everybody on pay and I get everybody on surviving. And I want to, I want to get out of the UFC for a minute and show these UFC fighters how to take over and own up another sport, how you’re supposed to do it.

Everybody, I’m the best of that and have them be right the f*ck back here to get a motherf*cking UFC title, the best title in the world.

Diaz:  I’m just going to show a show. Everybody had to own another sport. So all you motherfuckers out there trying to run the other sport, boxing, kickboxing, jiu jitsu are there. I may ordinations if you think you’re the tough creme de la creme right here. I’m coming for you.