Bantamweight world champion Ebanie Bridges will need surgery on her hand after sustaining a major injury during her championship defense on Saturday.

At the First Direct Arena in Leeds, Bridges faced fierce competitor Shannon O’Connell to defend her IBF championship. And even though she was able to win the boxing bout by a knockout in round eight, she wasn’t completely unharmed.

In a social media post, she displayed her extremely swollen hand while explaining that she would be having surgery for the injury. 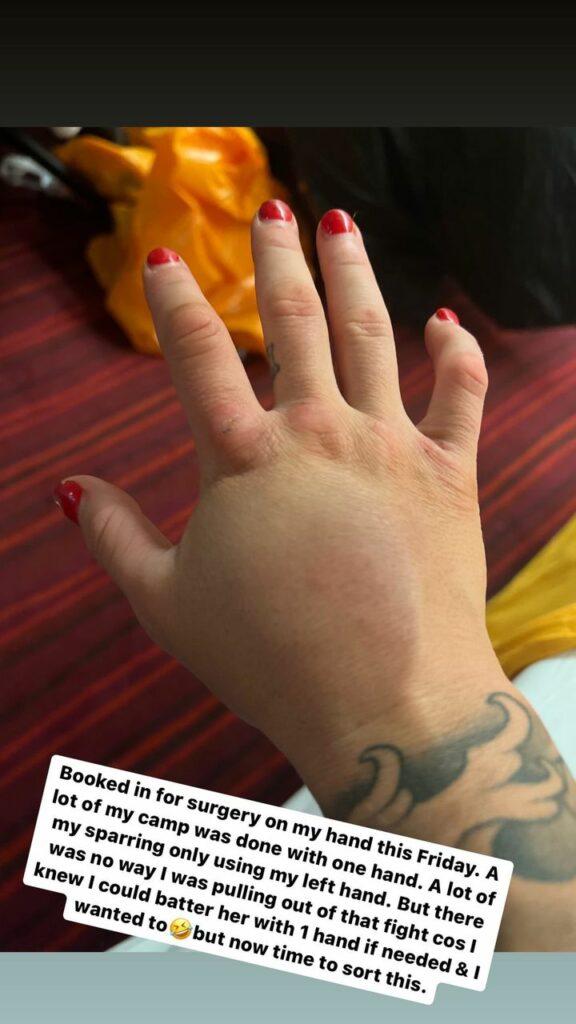 Bridges said in her Instagram post: “Booked in for surgery on my hand this Friday. A lot of my camp was done with only one hand. A lot of my sparring only using my left hand. But there was no way I was pulling out of this fight because I knew I could batter her with one hand if needed and I wanted to. But now time to sort this.”

Bridges and O’Connell were in a grudge match because Bridges was dismayed by comments her opponent was making about her in lead up to the event.

Bridges is infamous for using her attractive physique to attract additional attention. This rubbed O’Connell the wrong way and she wound up criticizing her choice:

Bridges was salty in her ring interview in the immediate aftermath of the KO:

“You know what not bad for a skanky stripper. I like tough fights and I am a world champion. She came to fight but I am better, I am not usually disrespectful but she was so horrible.”

“Not that badly hurt, I came back and this is boxing we are going to hit hard. I got the win so I am very satisfied. I hope Australia is proud and you know who is the queen of Australian boxing.

“This was the night I wanted. Winning a world title is easy and keeping it is the hard part. I haven’t fought for nine months. Thank you guys and to everyone has supported me. Team skanky stripper forever.”