Both Tito Ortiz and Chael Sonnen are legendary names in the world of mixed martial arts. In 2000, Ortiz became the second person to win UFC light heavyweight champion and defended it 5 times. He continued his long run in the promotion and was retired in 2012.

Meanwhile, Sonnen put up a pretty good fight against middleweight champions and top contenders during his UFC run. He is also a smooth talker, widely considered one of the best trash talkers in MMA. The two came from different eras but crossed paths when they competed in Bellator MMA.

Sonnen competed against Ortiz at Bellator 170 in 2017 where Ortiz submitted him with a rear-naked choke in the first round. However, Ortiz hasn’t had enough. The 47-year-old has been calling out Sonnen for a rematch several times. Back in October, during a recent talk in The Adam Carolla Show, Ortiz announced that their rematch is in the works at Freedom Fight Night.

“I will be competing one last time in the beginning of February. Tito Ortiz vs Chael Sonnen 2 will be happening for Freedom Fight Night. And I’m excited, I’m really excited.” Ortiz said.

Following that announcement, there were plenty who were skeptical considering Sonnen was adamant to troll Ortiz on social media and rebuff match rumors. 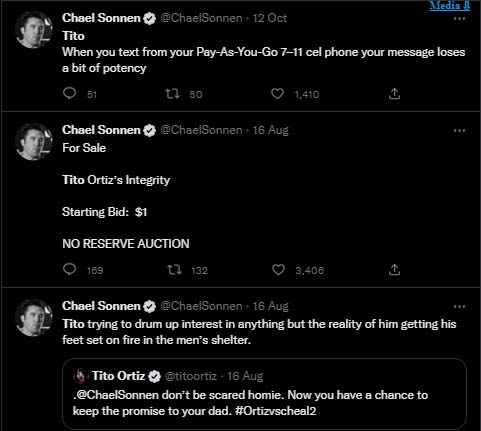 But recently, Freedom Fight Night officials confirmed that the rematch is not happening as of now. The promoter Harrison Rogers said:

“Man, I was so nervous to call Tito. I knew he really wanted to fight Chael. I knew he wanted to, not only to beat him up, but go out in his legacy with MMA victories. He might still be able to do that. I know he wanted this one really bad. But, it isn’t happening. The pay wouldn’t be as high as he hoped. But, man, he sees the bigger picture. He sees everything that we are building and he wants to be a part of it.” 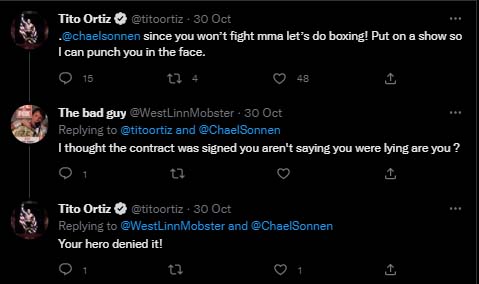