Mixed martial arts community lost a big star this past weekend when it was announced that Jason David Frank was found dead at 49.

Frank’s manager confirmed on Sunday that the 49-year-old MMA veteran and “Power Rangers” alumni star had passed away.

“Very sad to hear about my friend and client Jason David Frank’s passing. Jason was a martial artist best known for playing Tommy in the Power Rangers. He was a true martial artist and I had the pleasure of managing him for the fights he competed in. If anyone you know may be depressed please check on them.” 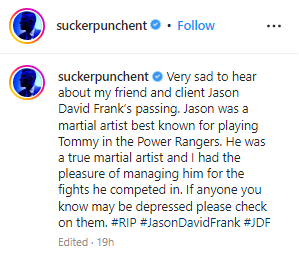 Prior to becoming The White Ranger, he first had the title of The Green Ranger. Frank appeared in 123 different Power Rangers episodes.

Frank had a year-long MMA career in addition to acting.

Frank participated in a total of five bouts in 2010. The “Power Rangers” actor proved how strong he was off-screen by defeating all four of his opponents in amateur competition. Before going professional later that year, he recorded two submissions and two knockouts.

In August 2010, Jose Roberto Vasquez was submitted by Frank in only 46 seconds to win his professional debut. It would be his first and only professional MMA bout.

In addition to having a flawless MMA record, the actor had significant martial arts experience. He has training in Brazilian jiu-jitsu, Muay Thai, and is an eighth-degree black belt in karate.

Jason David Frank established Rising Sun Karate, a training facility in Houston, Texas. This is where he provided instruction in Toso Kune Do, also known as the Way of the Fighting Fist. The martial arts school taught a style that Frank developed after years of research into numerous self-defense techniques.

‘Legend of the White Dragon’ was Frank’s last movie. It is scheduled to release in 2023. He announced his retirement from the Power Rangers series earlier this year.