Chimaev now resides in Sweden, where he immigrated at 18 after being born in Beno-Yurt, Chechnya. He maintains strong links to the place where he grew up. In Chechnya, he started his wrestling training that would ultimately lead him on a shortcut to the UFC title. 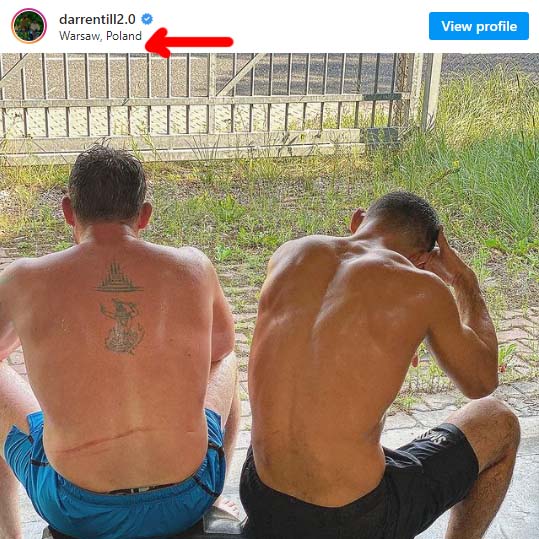 Chechen dictator, Ramzan Kadyrov,  has long been one of Chimaev’s most ardent supporters. Kadyrov is also involved in the current war in Ukraine.

Khamzat Chimaev is now preparing for his bout against Nate Diaz set to be the main event of UFC 279 on September 10th.

Chimaev is accompanied by friend and fellow UFC athlete Darren Till. The two visited Warsaw during their travel and trained at the WCA (Warsaw Center of Athletics) gym. This caused quite a bit of controversy considering Polish MMA community wants to distance themselves as far as possible from Russia and Chechen leader Ramzan Kadyrov.

Since the beginning of Russia’s aggression, Poland has been vocal in the condemnation of Russia. Poland’s leading MMA promotion KSW went on to release all of Russian athletes it had on its roster.

“Now everyone will pretend not to know about Khamzat’s connections with Kadyrov? Maybe he should call his friend on video and say something new about our country and what he would like to do with it …”

He went on to say as per mma.pl:

“At the moment I haven’t seen any of the Coaches or Players but some freak. Rather, the coaches have something to “talk” about on average, because it may be that the owner rented rooms for some recordings or just for training. “

WCA athletes were mostly happy to host the UFC aces.

Chimaev and Till allegedly weren’t planning on staying in Poland – it was more of an accident – which Zaborowski also mentioned:
“As I thought, he was there by accident” on the way “because I just got this info. But he still doesn’t understand the people who were into him. In this situation, it is impossible to say “I am not interested in what my colleague does.”

The only footage released from the gym was when one of their coaches shared Chimaev submitting Till.