Petr Yan found himself in a world of trouble prior to his title unification bout against the DQ champ Aljamain Sterling. The two are booked to square off during UFC 274 – however Yan will not be able to have his usual corner with him.

His Russian team had their visas denied recently. This was first reported by Tass’ Igor Lazorin. Yan can breathe a sigh of relief since his own visa is squared off. In the fall out, many speculated he would be going on to be cornered by countryman Khabib Nurmagomedov. What many might not realize is that there might be a huge cultural gap between the North Russian and Eastern Orthodox Yan – and Dagestani Muslim Khabib.

In the fall out from the visa denial, Yan solicited former Bantamweight champion Henry Cejudo publicly on twitter.

Cejudo, of course, diligently replied while taking a dig at Yan.

“Get me a booster seat and I’ll work your corner…you kneed me” Cejudo replied.

Yan followed up with his own hilarious conditions. Of course what nobody is mentioning is that Yan doesn’t really speak English so a foreign corner is more of an intimidation tactic than anything. And even his tweets are likely written by his management.

Cejudo replied in kind using a photoshopped meme of himself throwing in the towel for Yan. 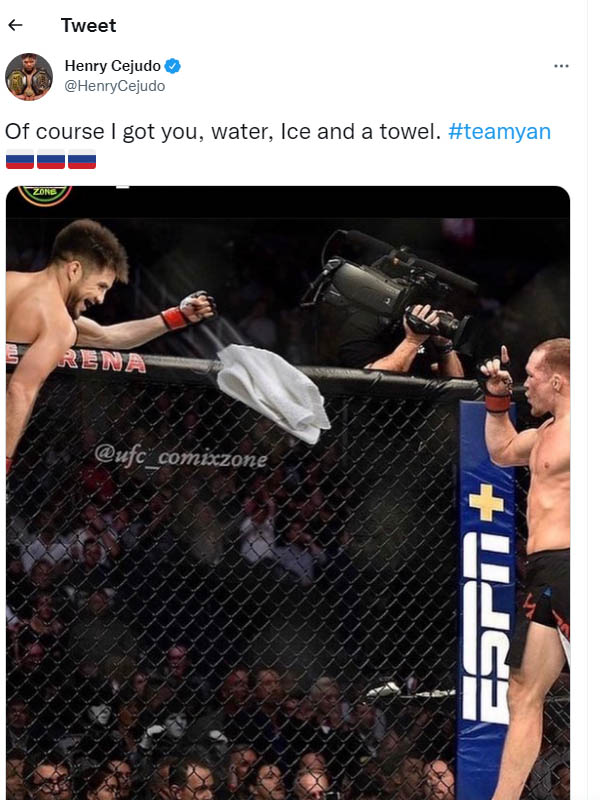 No word yet if the things between them are purely comedic or if the jibes are real. Cejudo wanted to return and face Volkanovski in the featherweight division however he released a statement earlier this month saying that he’s aware that he probably talked a bit much for Dana White’s liking.

UFC 273 happens April 9th – it will be headlined by the clash between Volkanovski and Korean Zombie. In addition to them we’ll also be able to watch Gilbert Burns vs Khamzat Chimaev and Mackenzie Dern against Tecia Torres.