Petr Yan may have lost the bantamweight title but he’s not dwelling on it. The Russian boxer has been trying to stay active and has been negotiating his next outing against the tricky Marlon Vera.

“We’re literally one win away from fighting for that belt, so I hope we get it done with Yan,” Vera said in an interview with The Schmo. “I think that’s the path to the belt, No. 1 contender. We kick his ass, and we move forward.”

He continued, “I stop Yan, and I get a title shot.”

One would imagine the same applies to Yan. On the other hand, Aldo is gearing up to face Merab Dvalishivili – that bout could also produce the next contender.

Regardless of that Petr Yan pointed out something interesting earlier today on twitter.

“The truth is you retired the day I became number 1 contender and unretired on the same day I ceased to be the champion. Now you ducking me again only proving those facts” 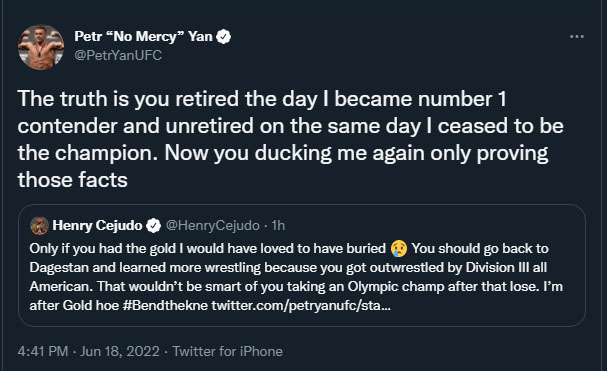 Cejudo has re entered the USADA pool and will be eligible to fight sometime in late fall. It remains to be seen if former two division UFC champion can get his marketing right on the 2nd try because the skillset is certainly there.