Paulo Costa ‘Borracinha’ had previously expressed his admiriation for Putin – and later deleted the tweets under pressure. 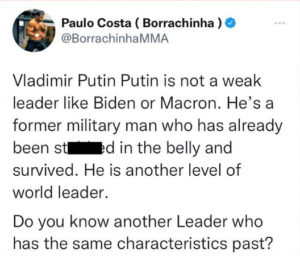 For this since deleted tweet Borracinha was viciously roasted.

But he’s had another change of heart. Earlier today Costa shared the following praise on twitter (backup):

Vladimir Putin is not a weak leader like Biden or Macron. He is an ex-military man who was once stabbed in the belly and survived. He is another level of world leader.
you may hate it, but it’s the truth. pic.twitter.com/T1BWMi56gJ

This tweet sounds eerily similar to the previous one – and this time Costa appears to be sticking by his guns.

Talking seriously, he is fearless. I’m proud of he. He stands right or not.

He been wrong or right don’t matters. contest everything and get you thinking is the most important thing than be right in the end

Considering how many controversial tweets Costa releases on the daily it’s hard to conclude if he’s serious or trolling when it comes to most of his attitudes including this one.