UFC’s rising star Paddy ‘The Baddy’ Pimblett recently talked about the lightweight title fight between Charles Oliveira and Dustin Poirier in December where Poirier lost in the third round via a standing rear-naked choke after taking a lot of punishment from closed guard in round 2.

During a talk with Michael Bisping in a recent episode of Michael Bisping’s podcast, Pimblett expressed his disappointment towards Poirier. He said he had faith in Poirier and believed that he could snatch the lightweight belt, but things turned otherwise. Charles Oliveira got the better of Poirier resulting in him losing his second title shot.

“I went with Poirier over Oliveira, and lad, after watching that fight as well, I’m watching that thinking, ‘Lad, if Oliveira can do that to you, Dustin, I can,” said Paddy Pimblett.

Pimblett added, “It’s mad like, when you watch it, MMA math doesn’t work, but when you watch fights, you’re just like, ‘Wow, if he can do that and get in that position, then f***ing I can.’”

Paddy Pimblett entered the UFC in September last year and gained people’s attention when finishing Luigi Vendramini in a first-round technical knockout. Now, the British is waiting for the UFC to announce his next target. Even though the promotion hasn’t revealed anything yet, Pimblett has said he’d like to fight Jared Gordon.

Earlier this month it was rumored Pimblett would be facing Donald Cowboy Cerrone but Pimblett debunked that rumor.

“Obviously, I need to mention my guy, my manchild [Chael] Sonnen. I don’t know why he is so angry. Don’t know what got his panties in a twist. Because I haven’t even said nothing about him. Because ‘clickbait’ in the UK isn’t an offensive word. No, like the way I say it isn’t really offensive. In America ‘clickbait’ must be like f*** me. It was like I was Anderson Silva. He just started to go off on one video. But yeah, I have never said anything bad about Chael. Chael’s never messaged me to ask me if I actually am fighting ‘Cowboy’ or it’s been offered. Because it’s never been offered. No one from the UFC has contacted us with ‘Cowboy’ Cerrone. If they did, I’d bite their hands off for it.”

Outside the UFC, the 27-year-old fighter spent most of his fights in Cage Warriors. So far Paddy Pimbett holds professional MMA records consisting of 17 wins and 3 losses.

Pimblett is currently in the process of slimming down to his fight weight – we’ve previously posted about his incredible dirty bulk after the Vendramini fight. 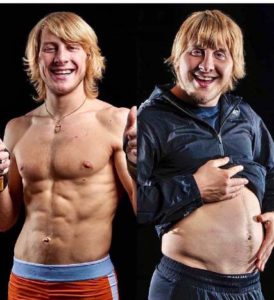