Paddy Pimblett just got in a little bit of a scuffle ahead of his UFC London bout. Paddy the Baddy reportedly instigated the incident on twitter having made derogatory comment about Topuria’s home state of Georgia . 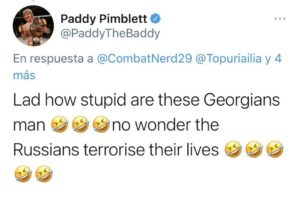 Topuria explained his side of the beef telling MMA junkie:

“I don’t know him, but the first interaction that I had with him was because he was arguing with Guram Kutateladze,” Topuria told MMA Junkie in Spanish. “I’m not really sure why or what they were talking about, and all of the sudden I read something I think like, ‘Now I know why Russia bombed Georgia. You guys are a bunch of idiots.’

“So my reaction to someone taking this like a joke when in that war many innocent people died – we’re talking about children and people who had nothing to do with that. So for someone to laugh at that, and it’s also a painful subject for me because family members of mine died in that war and many countrymen of mine. So it’s not something that pleases me and from there everything started.

“And what can I say about someone who pokes fun at that? He’s an idiot and immature. If he thinks I’m going to take a step back when I see him, then he’s badly mistaken. He needs to pray that we don’t cross paths because I’ll go crazy.”

“Everybody come out of a room either six of us boys or whatever. It was all this corner man and other people on here. He looked at me so I stared at him. Obviously, he was chatting s–t the other week on Twitter.”

“They thought I’m gonna said what? And he walked towards me. He might have said something in Spanish, I don’t know don’t understand Spanish. And then as he got closer, what lad to what’s happened lad , and then he walked towards me and like after this was done.”

“So obviously I took that as some time to do so, so I stepped grabbed the hand sanitizer and bounced it off his head. That bounces off him he then starts to throw a right hook at me and a steps back out away at that. And then he tries to throw me exactly so just like move me out the way and then obviously all commotion or is it was funny like because there’s a table in the way it was if he wanted to do something he would have ran around round the table and started it me. Well, he didn’t really want to do that”