Sammy-Jo Luxton is a female muay thai athlete that currently has a contract with ONE FC. Luxton is a part of a new way at ONE where they’re trying to court a certain demographic.

Luxton is also active on social media so she saw fit to interact with fan posts – which is how things got messy, pun intended.

It all started with an aptly formatted picture of Luxton. On one half she was very affable and attractive and on another she was in the throes of a combat sports performance.

Along with the image collage was the caption: “I was watching Road to ONE and stumbled across this Muay Thai fighter. Sammy-Jo Luxton, holy s**t. Get yourself a girl that can do both.” 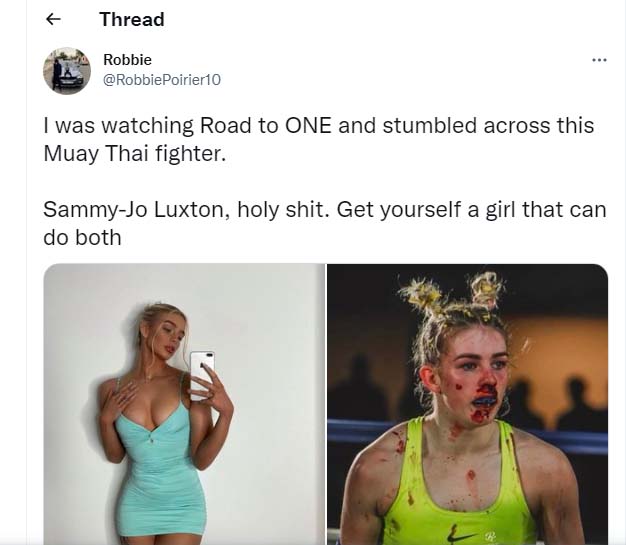 Reacting to the post, another fan added: “I’d let her take a dump on me,”.

At which point Luxton (who clearly searches for her own name) replied: “If the price is right I’ll do it.”

This is reminiscent of the approach Boxer Ebanie Bridges has to her craft – which has turned lucrative.

Sadly Luxton’s fanbase was a tad more sensitive and her fans were very much unamused by the notion.

“My brother and sister in Christ seek help.”

Of course backlash wasn’t the only interesting response, there was also a usual amount of MMA memes.

Romance is alive and well

While it’s probably unlikely Luxton will make this young MMA fan’s dream a reality, Luxton isn’t quite as shy about the incident either. She ended up sharing screenshots of the coverage on her social media.

This might be a bit off from the ONE FC’s publicly established identity but at least it’s free PR – which is actually very uncommon for the promotion so they might just be tempted to embrace her.