UFC Lightweight Paddy Pimblett surprised everyone when he stated that he made only $24.000 (not counting the performance bonus) for his UFC Main card appearance during UFC London.

Despite having only two fights in the UFC, Pimblett is perhaps the biggest British star in the organization. Liverpool native has been a fan favorite ever since his days at Cage Warriors due to his aggressive style and comically stereotypical appearance.

Pimblett was arguably the favorite fighter among the UFC London crowd. During the transmission of the event, you could see countless fans cheering him with wigs mimicking his trademark hair.

ONE FC Lightweight champion Thanh Le recently shared on an Instagram story that he made even less than Pimblett for his first ONE FC title fight. ONE FC is one of the biggest fighting promotions in Asia, several MMA stars have been a part of their rosters like Demetrious Johnson, Ben Askren, and Eddie Alvarez. 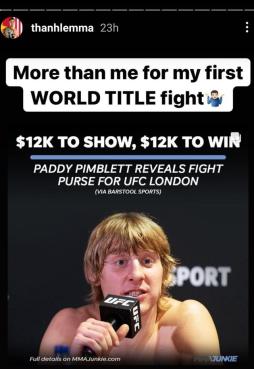 And in case you think his title fight was too long ago, we’ve got news – it was in October of 2020. ONE FC typically talks a big game but majority of the competitors are not handsomely rewarded. In fact ONE started the practice of awarding $50,000 bonuses to competitors only recently. ONE FC’s financials are a separate can of worms very hard to disentangle however it is very surprising to learn that there are men risking their health and climbing to the top of an organization that is barely compensating them for the damage they suffer while competing.

This type of pay is on pair with what UFC used to pay a long time ago. Thanks to Paddy gate, it was revealed by Ariel Helwani that MMA’s biggest superstar, Conor McGregor, was making $12,000 to show and $12,000 to win back in 2012.

But less than that means having to rewind back further for the UFC.

Dan Hardy says at UFC 95 his contract was $5K/$5K.#TheMMAHour