Francis Ngannou’s coach Erick Nicksick said that one of Ngannou’s contract conditions could’ve prevented Darrick Minner from being involved in a betting scandal.

Former UFC heavyweight champion Francis Ngannou is no longer with the promotion. He was stripped of his title and is now a free agent. The UFC dropped ‘The Predator’ from rankings after negotiations fell apart. Ngannou rejected an estimated $8m offer and suggested there needed to be balance of power in the contract. He countered wanting to sign a 3 bout contract with no auto extensions but UFC brass wasn’t biting.

Darrick Minner entered the octagon in November of last year to face Shayilan Nuerdanbieke. He lost via TKO early in the first round and seemingly suffered an injury that he did not inform the UFC about. Prior to their outing, there was a huge movement in the betting line that was pretty suspicious. The UFC would later release him and the NSAC suspended him along with his coach James Krause.

Erick Nicksick took to his Twitter account to explain how general health insurance could prevent something like that from happening again. The UFC only provides insurance for injuries in the octagon. He believes Minner’s intention was to get insurance by claiming that he suffered the injury within the octagon.

“Knowing that a ton of fighters fight injured, so they can claim the injury in the fight to get the insurance. If health insurance was available for the fighters in the UFC, I wonder if Darrick Minner still tries to fight on a compromised knee?” Nicksick wrote. 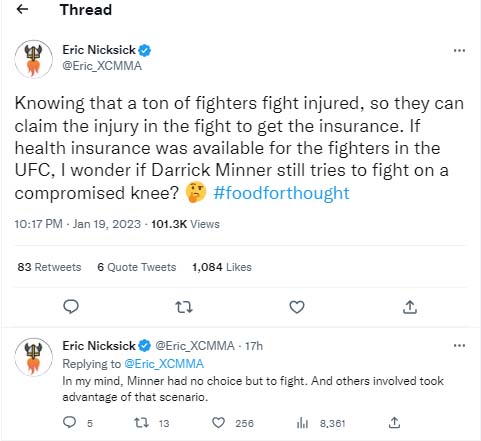 He believes Minner had no choice and the betting line scandal was just unfortunate.

“In my mind, Minner had no choice but to fight. And others involved took advantage of that scenario.” He added.

UFC athletes constantly go out there and compete with severe injuries including torn shoulder and knee ligaments because UFC does not cover injuries suffered during camp – just those that happen in cage. This has led to speculations about a rising number of bout ending injuries.

From TJ Dillashaw, through Minner, Tom Aspinall, Brian Ortega and many others the athletes go out there just trying to get their injuries covered.