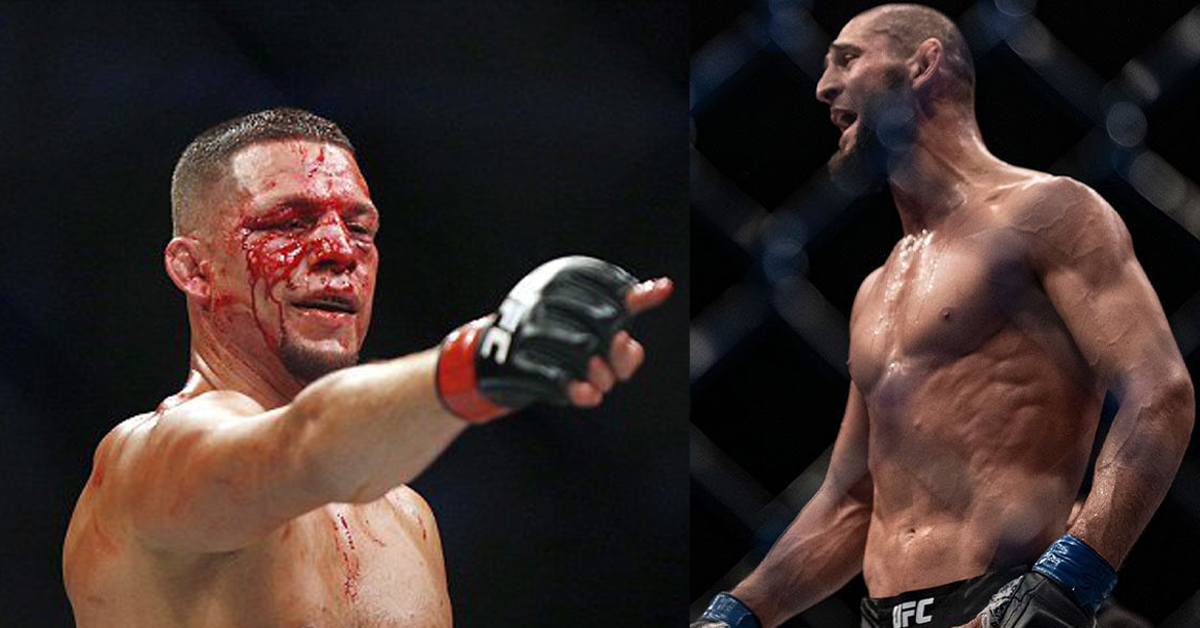 Many fans would agree that Khamzat Chimaev is one of the most dangerous rookies, especially in the UFC welterweight division. With only 4 fights, the Chechen Wolf is now ranked as number 11 in the UFC welterweight rankings. Of course these rankings would be more relevant if they were based on something – and not just an arbitrary thing.

Since beating Li Jingliang in October, Chimaev has been a big draw and has talked a big game on Twitter  hoping to secure a big name for his next fight. A lot of them are trying to hang onto their place in the rankings and aren’t happy to punch down, sort of speak. The UFC president himself Dana White, has said that “Nobody wants to fight this guy”. But in spite of what White has been saying to market Chimaev – there have been fighters willing to fight him. Neil Magny for one.

One of fighters that refused to punch down in rankings is the fan-favorite Nate Diaz.

“They’re coming at me with [Chimaev], and I’m like, ‘Hold on, don’t disrespect me like that, trying to offer me a fight with a rookie.’ I’m cool, you got four fights in the UFC. Don’t even talk my name.” Nate told MMA Fighting.

“Fight the newer guys in the UFC. There are levels to this, and I don’t even want to hear his name. Hey Khamzat, if you in there, don’t be a b*tch, my boy’s right here, fight him,” Diaz said. “Anybody in the higher level even playing along to this Khamzat sh*t, you’re a b*tch, too, taking that sh*t. You’re a new rookie. Deal with new people.”

In all honesty – Diaz is not one to cherry pick his opponents. Recently he stepped up to fight Leon Edwards – in spite of many analysts and pros seeing this as a match up that wouldn’t complement Diaz. And true to that estimate Diaz came up short in the exchange.

Khamzat Chimaev took to his Twitter to respond and called Nate a ‘fake gangster’.

“You fake gangster @NateDiaz209 and I don’t care who to fight I’m coming for everybody, where are you all the gangsters and kings? I’m here to kill everyone I’m the king here I’m a gangster here.” Wrote Chimaev while tagging Nate’s Twitter account. “you are the easiest money for me thin.” Added Chimaev.

You fake gangster @NateDiaz209 and I don’t care who to fight i’m coming for everybody, where are you all the gangsters and kings ?

i’m here to kill everyone i’m the king here i’m a gangster here ☝??

Khamzat Chimaev started his professional MMA career in 2018 and has won all of his fights – often in a very impressive fashion. But he hasn’t really faced anyone with a great wrestling pedigree – and certainly wouldn’t have done so with Nate Diaz match up.

Meanwhile, Nate Diaz has been competing for years on end with an MMA record consisting of 20 wins and 13 losses.