UFC flyweight prospect Muhammad Mokaev and Charles Johnson are beefing on social media with one another prior to their bout.

Mokaev and Johnson are scheduled to square off at a UFC event on July 23. The heavyweight contest between top contenders Curtis Blaydes and Tom Aspinall will be the main event of the show in London.

Johnson is making his official debut after a stellar LFA career that included a flyweight championship reign. At the UFC’s previous event in London, Mokaev defeated Cody Durden to win his UFC debut earlier this year.

This beef began on Wednesday when Mokaev posted a photo of himself carrying an AK47 and addressing Johnson. 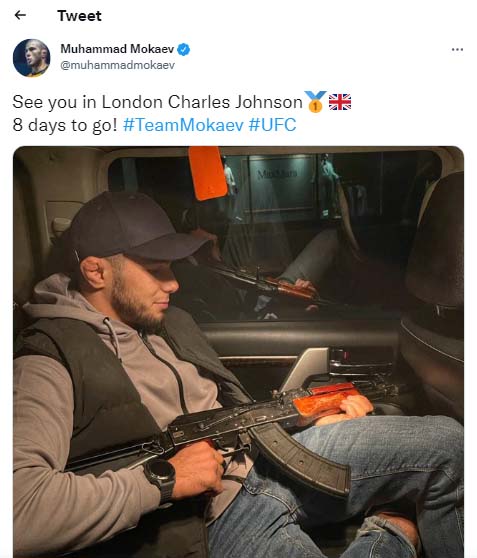 Why an MMA athlete is threatening another MMA athlete with a rifle is one of life’s mysteries.

Johnson objected to Mokaev’s picture despite the fact that his tweet may have been seen as a light-hearted dig.

Johnson recently responded to Mokaev’s tweet. He said: “You posing with a gun, that s*it won’t be there when u see me kid [Muhammad Mokaev]. I’m from the Lou, done been around real shootouts and seen real hitters my whole life. Keep that same energy.”

“I born in Dagestan and grew up in Manchester these 2 places can’t be compared to your Lou or whatever. Don’t get too emotional about this picture you getting smashed Saturday night, I’ve gone past 30 guys like you and you ain’t different to rest of them!”

Johnson continued by drawing comparisons between his and Mokaev’s origins.

He responded, “I’m really from that s*it. “You been groomed since u was 12 to play in a cage where a ref can save you if s*it get outta control. This how I know you and yo team goofies. Gunplay ain’t a joke. Real ones would never.

Keep that same energy when u see me kid.” 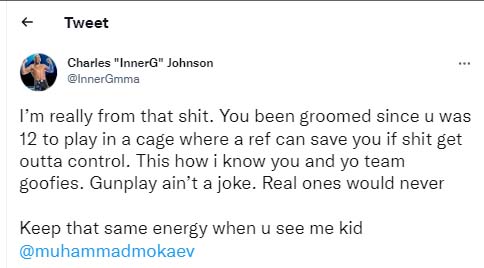 The conversation came to an end when Mokaev made fun of Johnson’s vehement answers.

The winner of the match could get a spot in the flyweight rankings. The hype has been aided by both athlete’ recent social media banter and their outstanding winning streaks.