Khamzat Chimaev has made his name with impressive octagon performances. The Russian born athlete even went so far as to claim he would ‘kill everyone’ during his latest post fight speech.

But in spite of showcasing his brutality in the cage, he’s also showed support for Jon Jones. Former light heavyweight UFC champion has been going through a hard time as of late – and deservedly so considering that his longtime fiancée left him after an arrest for domestic violence.

This is a moment many MMA spectators used to pile on Jones who claimed he feels horribly over the deterioration of his private life.

While many fighters and spectators piled on Jones, Chimaev shared a supportive message saying: ‘We are with you legend (Jon Jones)’.

Plenty of fans took umbrage with Chimaev’s support of Jones.  As a reminder this is just the latest arrest for Jones, 34. He has previously been arrested several times – the most egregious being for a hit and run performed on a pregnant woman in 2015. At that time Jones was stripped of the Light heavyweight title.

Domestic violence arrest seems to be a bridge too far for most of his fans. Especially following the release of the gruesome report stemming from the arrest on September 24th 2021. 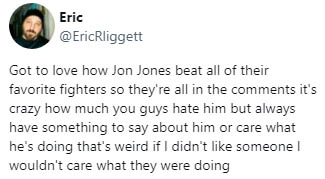 Jon Jones’ arrest in Las Vegas in September of 2021 surprised everyone. Just a day earlier Jones had received UFC Hall of Fame award and appeared to be on the mend with the organization. Things between Jones and UFC were contentious due to the prospect of the ‘big money fight’ between himself and Francis Ngannou. The fight was quickly scrapped – and so was Jones’ heavyweight debut.

Jones was publicly condemned when it came out that he was arrested for domestic violence against his domestic partner of 18 years and the mother of his 3 daughters, Jessie Moses. Moses downplayed the incident – even in the police interview that same night but the report was damning.

His future in the UFC remains under a question mark.