A talented martial artist ended his career in mixed martial arts in favor of a greater purpose: providing clean water to Pygmies in the Congo wilderness.

A wholesome meme of Wren recently emerged on reddit and started circling in Joe Rogan subreddit in addition to martial art ones. 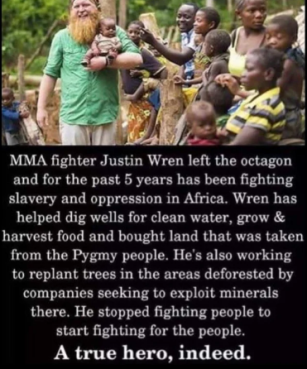 Justin Wren was on a steep downward trajectory in his life five years ago. Justin, a two-time national wrestling champion, had advanced to the show’s quarterfinals as a potential UFC athlete. But the talented heavyweight found the dark side of mixed martial arts to be overwhelming. To save his life, Justin quit the sport while on a winning spree.

In 2013, Justin started a project called “Fight for the Forgotten” to help enslaved Pygmy slaves in the Ituri jungle in the DRC. Due to deforestation, the Pygmies were forced to rely on their slave owners for survival after losing their primary food supply.

The Pygmies, the oldest ethnic group in the Congo, were denied access to basic necessities like healthcare because they were not considered citizens. The Pygmies were referred to by their masters as “animals.” Through FFTF, Justin and his colleagues secured the release of hundreds of “the Forgotten People” in return for water wells with Bunia’s Shalom University and Water4.org.

Those who had been set free relocated to 2,470 acres of property that FFTF and Shalom had acquired in their name. During his one-year tenure between 2013 and 2014, Justin and his well-drilling crew drilled 12 life-saving wells. The Shalom drillers have launched agricultural programs and finished 27 water wells since his return to the United States, teaching the Pygmies how to live independently once again.

Justin returned to the Bellator cage on August 28 to bring attention to the condition of the Pygmies and to keep his vow to give them a voice after a five-year hiatus and a difficult road coming back into martial arts. Justin received a unanimous victory and gave FFTF a portion of his winnings.

For the duration of his MMA career, he intends to donate FFTF his victory bonuses. For the remainder of his life, he has vowed to assist the pygmies.

Wren was also pleased to see the wholesome meme of him emerge and had penned a touching post detailing some of what he went through:

Wren was pleased that a series of posts raising awareness about his causes had once again gone viral – but he detailed a personal struggle he’s undergoing at the time saying:

“I’m thankful for good friends, because my dad is in the hospital. A heart attack 6 weeks ago, a stroked 4 weeks ago, another heart attack last weekend, and now they don’t know if he’ll make it back off the table when he goes in for a triple bypass surgery. ”

Wren detailed his often difficult relationship with his father that caused a great deal of personal struggle but kept it positive outlining some of the charitable goals he’s achieved in the last 5 years.

Now, we are going to do our biggest thing yet. 10 years ago I buried a boy named Andibo because of waterborne disease. I’ve had malaria 3x, almost died because of it once. Now we are gearing up to build a real deal hospital (or level 3 health clinic in Uganda), with a maternity wards a pediatrics unit, an ER/triage center, a dental suite, and equipped to treat waterborne disease and malaria. The two top reasons of death, with death during labor/birthing being high risk too. We will build this hospital in honor of Andibo. We are also building a school! We will build a marketplace for trade, business, and vocational training. The nearest medical clinic is two hours away, the nearest school is two hours away, the nearest big market is two hours away. It’s needed, it matters, and we are going to bring community development, future planning, creating a local economy, infrastructure, and the possibility for a better future. I’m not in the charity “business.” The people I love don’t want charity, a hand out. They want, ask for, desire, and pursue opportunity. A hand up. That’s what we are doing. Future planning by having a water reservoir that can serve 5,000 now, and the hospital, school, and marketplace… but since the community will grow it will be able to handle 20,000+… Maybe up to 50,000 depending on how big we can make it. “