Another fan tested Mike Tyson’s nerves this weekend in Las Vegas. This latest incident comes just over a week after Tyson got into a scuffle with a provocateur during a Jetblue flight – and roughly a month after an upset fan accosted him at a club.

Tyson was in Vegas attending events ahead of the Shakur Stevenson’s unanimous decision win over Oscar Valdez. While there he was amicable and was taking photos with fans, when a woman got her finger close to his face, from behind.

Tyson wasn’t having it, he quickly turned around to confront the pink-nailed woman, but his security successfully intervened and de-escalated the situation.

Mike Tyson was known for his aggression in the ring. Considering he’s dealing with a potential civil lawsuit stemming from the Jetblue flight altercation it’s best that he let security deal with the intrusive gesture.

“My anger is not towards anybody, there is no physical being that causes my anger”.

Tyson has been busy recording his “Hotboxin” podcast and promoting his ear candy. A source close to Tyson revealed:

“If Mike was really punching him, he would’ve been laid out! Those cuts weren’t from Mike Tyson’s fist. [Townsend] was so wasted out of his mind, he hit his head on the [airplane] tray table,” claimed a source who wasn’t on the flight.

Tyson’s reps claimed that the fan on the plane, Melvin Townsend III, threw a water bottle to provoke him. Townsend’s attorney denied that claim.

Tyson previously shared a revealing quote on social media some years back. The quote had gone viral in the fall out from the incidents he’s been in recently. 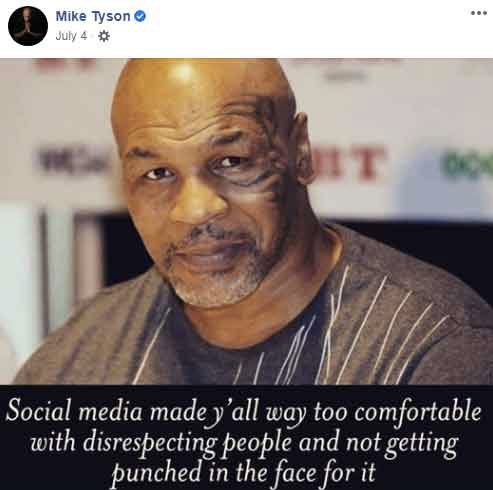 Joe Rogan is uniquely equipped to way in on the incident considering that Rogan had hosted Tyson on his podcast just hours prior to the altercation.

Townsend reportedly declined to press charges at the time, and both he and Tyson were free to leave after the incident. It’s unclear if the investigation is ongoing.