Mike Jackson famously came to the UFC when they were in pursuit of someone to match CM Punk (born Phil Brooks) with. Jackson signed with the UFC despite having barely any experience in MMA.

In turn his bout with CM Punk went the distance and even got overturned to a no contest ultimately. Back in April Jackson got booked for his 2nd bout against an Irish kickboxer who had been waiting for over a year to make his debut due to covid restrictions.

Barry proceeded to both kick Jackson to the groin and eye gouge him – resulting in Jackson winning via DQ.

After the bout, Jackson revealed:

“He’s going to say to the people I’m the one who quit. That in itself is white fragility. Then he has to go through and delete his Twitter cause he’s a piece of s***.”

Term ‘white fragility’ was coined by academic Robin DiAngelo in 2011. It’s meant to describe the disbelieving defensiveness that white people exhibit when their ideas about race and racism are challenged—and particularly when they feel implicated in white superiority ideas.

The notion is that Barry is too sensitive too criticism because of his race – which is frankly odd considering it’s way more likely he’s too sensitive of the criticism because he failed against the worst UFC athlete on the roster. Jackson had one amateur bout prior to arriving in the UFC – and he managed to lose that too. In the span of years from 2009 until their bout in 2022, Jackson had a record of 1 amateur loss, 1 loss and 1 no contest.

Barry was subsequently released from the UFC, prompting Jackson to go on a racist tirade. 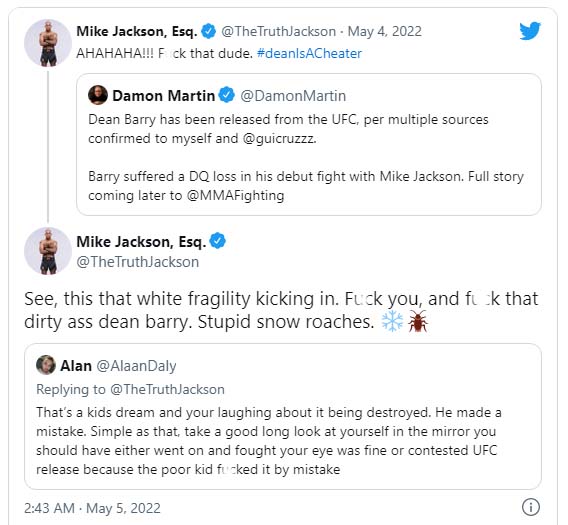 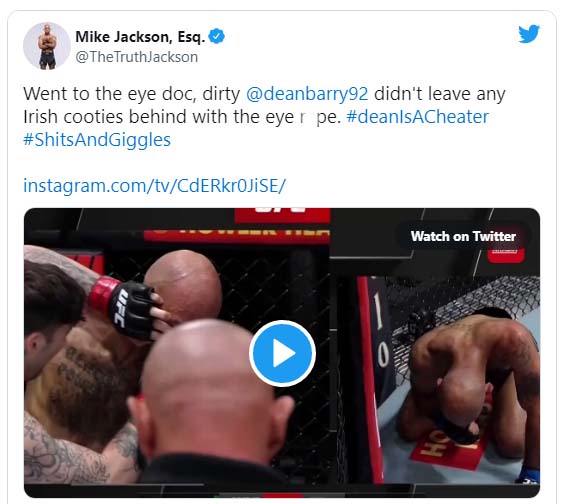 These are some very racially charged comments – especially considering that Barry did suffer the consequences of his actions.

As for Jackson, he’s rumored to have a one fight left on his contract.