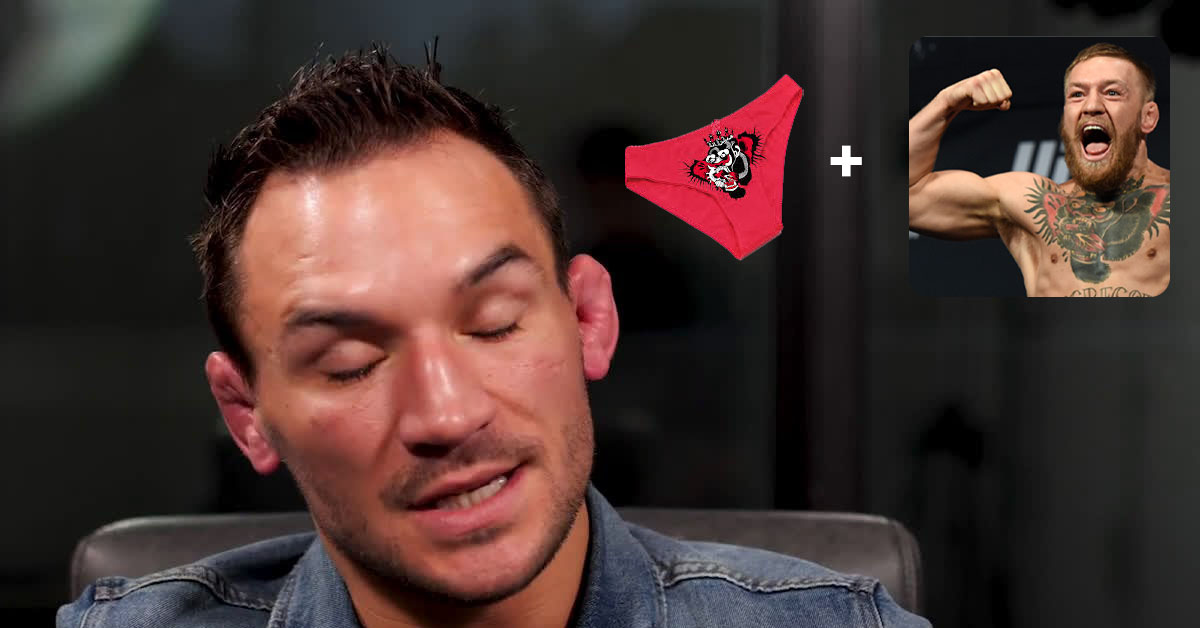 Michael Chandler’s Bellator championship belt isn’t even cold yet and Chandler is giving it his best to try and make sure his UFC run is more lucrative than most. Currently Chandler is 1-2 in the UFC and has already had a title shot. But for the 35 year old Chandler money seems to be a prerogative. This is why he’s repeatedly showered the troubled Irish sports star Conor McGregor with praises.

It all started after Chandler stood up for McGregor who was mercilessly mocked for a baffling evaluation of his last performance.

“That left hand can put anybody out on the entire planet,” Chandler said on the “Bussin’ With The Boys” podcast. “I think my right hand can put anybody out on the the entire planet, so I think it’s a perfect fight. It’s a different approach when you’re fighting a guy like Conor because fighting a guy like Gaethje, who loves to brawl, is much easier than a guy who you’re really afraid to sometimes throw a punch at because of the shot that you don’t see coming as you’re pulling your hand back. So, you definitely got to be on your Ps and Qs with the striking. But then the coolest thing about Conor, too, is everybody always talks about how bad of a wrestler he is, how bad of a grappler he is.”

“Chad Mendes took him down a couple times. He got taken down a couple times in the second (Nate) Diaz fight. He got taken down numerous times in other fights, and he has always kept his composure. His mental awareness capacity and stability inside of the octagon, inside the confines of competition, especially with how heightened the stakes and the senses are inside of his fights while everybody in the entire world is watching, is something to behold, man. He’s a different level of competitor, and anybody who discredits him because he’s lost fights is just either a casual or a Conor hater, to be honest with you.”

Chandler followed up this soundbite with the following tweet: 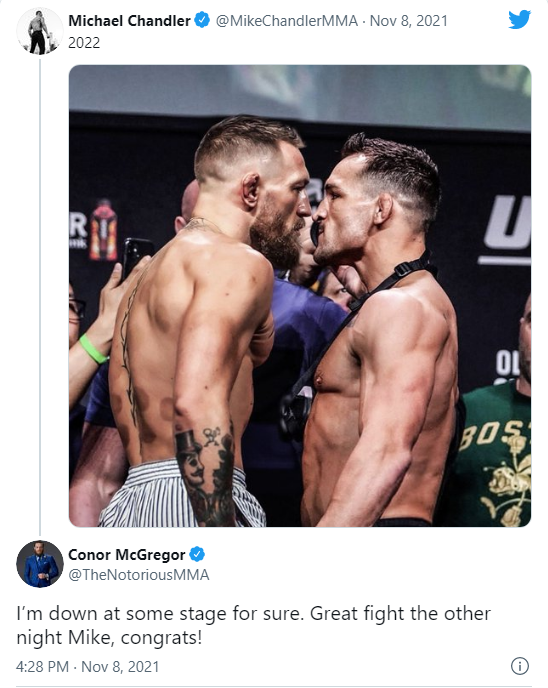 But things quickly escalated once fans figured out what Chandler was likely upto. 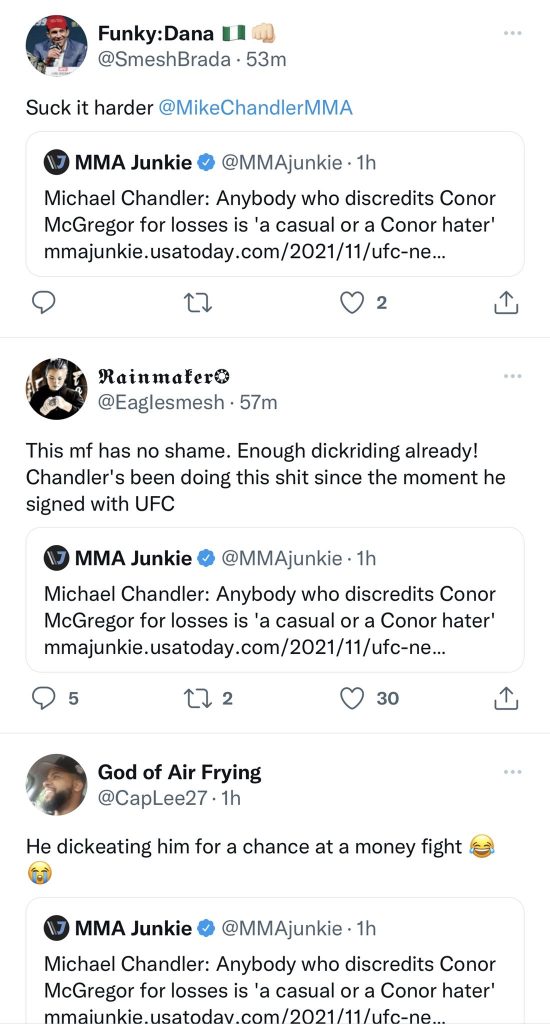 But things escalated from there. Chandler accurately appraised that he was now in the running. He backed those comments up with an appearance on MMA Hour where he claimed it was not about the money.

“I’ve got a ton of respect for Conor because what Conor has done — and people will discredit what he has done because of certain things that he has said — but what he has done is revolutionize the entire sport. The sport of mixed martial arts is better because Conor McGregor is in it. It’s bigger and it’s got more eyeballs on it because of what Conor has done, so to share the octagon with him, that’s why I want to do it. It’s not the payday, it’s not the ‘red panty night,’ it’s not the thing that all these other fighters are chasing. Do I want that? Do I want to provide for my family? Of course. But I want epic moments of maximum amounts of impact and that’s what you get when you fight Conor McGregor.”

And this wasn’t enough for Chandler, just last night he followed up with:
“Why would the biggest name in the sport come back and fight a guy who QUIT over a guy who is the second most electrifying guy in the division?”

Why would the biggest name in the sport come back and fight a guy who QUIT over a guy who is the second most electrifying guy in the division? #analystfail #UFC269

MMA twitter was… equal parts unamused and creeped out.

A grown man kissing up to another grown man in hopes that it will get him picked as an opponent is really…awkward to witness. https://t.co/tOsgFCnHIZ

No word yet on how Firas Zahabi feels seeing this display of dude on dude action.