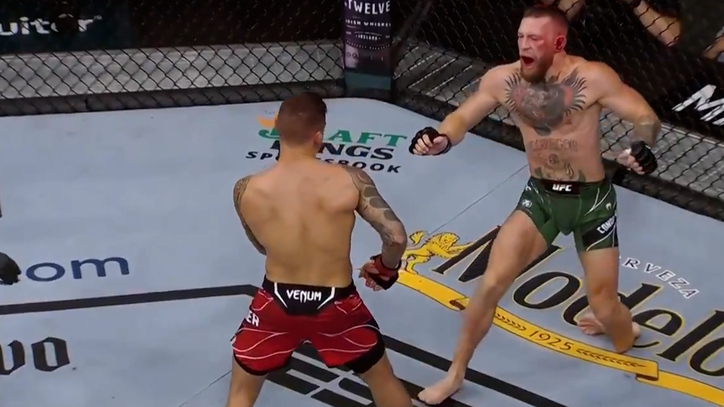 Conor McGregor is becoming increasingly salty with every mixed martial arts loss. He was once praised as someone who could take a loss, learn the lessons and apply them but apparently he’s gone off those rails completely – and it’s not just because of wives DMing him incessantly.

McGregor just shared recordings of himself getting back on his feet after gruesome leg break.

Yet he’s not able to enjoy the recovery. Sometime last night the troubled irish sports star shared footage he believes makes it clear he was winning at the time of a catastrophic leg break.

Good angle. Can see the leg was broke before I even stood up. It was broke before the guillotine even. It’s why I went for it. 4 shots to zero here in this clip to close the fight before the injury. This fight was going my way 100%. But big congrats lads hahaha ye right. Rats. pic.twitter.com/Q7DkcKo4ar

“Good angle. Can see the leg was broke before I even stood up. It was broke before the guillotine even. It’s why I went for it. 4 shots to zero here in this clip to close the fight before the injury. This fight was going my way 100%. But big congrats lads hahaha ye right. Rats.”

What McGregor either doesn’t know or doesn’t care to know is UFC has an official fight metrics partner – ufcstats.com and the stats are bleak. Poirier had landed 36 out of 66 strikes – almost all to his head. Meanwhile McGregor delivered only 27 out of 38 attempted – and a good deal was them was to the body and the legs of Poirier. 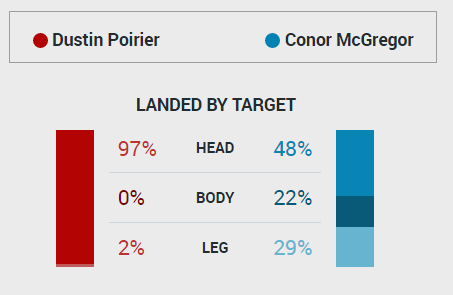 Sadly for McGregor – the losing part of the equation might not be his own athletic abilities as much as strategic failures utilized in both the first and second Dustin Poirier fight.

Long time McGregor head coach SBG’s John Kavanagh was content to let McGregor decide his own camp – in addition to praising the guillotine strategy. For those unaware the guillotine is an effective move – but it’s only as effective as your guard retention skills due to the huge danger you’re putting yourself in if you don’t recognize optimal timing, setup and more. In addition to it – it’s a move that will gas your arms hard if you don’t master it. Additionally Poirier is a master of the guillotine making him also very familiar with the technique and various pitfalls and counters. This is why Poirier only attempted the submission on Nurmagomedov once his other lines of defense were exhausted.

“At the kind of two-minute mark, it was reminding me a lot of the New York, the Eddie fight, and he predicted it would be a kind of a masterclass like that. Really had started to believe that’s how it was going. It was going fantastic. I thought he looked really, really good in there,” John Kavanagh said.” Kavanagh shared post fight.
“I think about the halfway point, there was an exchange where Dustin landed a good cross and he pushed Conor back, and there was a punch and a clinch and they went to the fence, and we drilled a lot in this position. I studied Dustin a lot on the fence – his fight with [Max] Holloway for example. We knew his head would be there for the guillotine. So we drilled that a lot.”

And there in lies the blame – to look at a situation with objectivity you have to be willing to be unbiased.