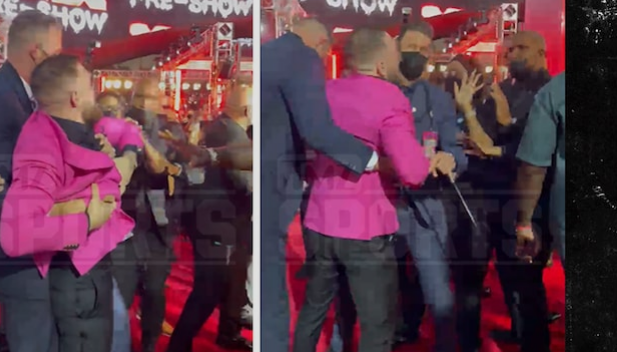 For some reason Conor McGregor was invited to the Video Music Awards last night. The controversial irish sports star once again caused an incident. Luckily there was plenty of security around that prevented the spat between McGregor and musician Machine Gun Kelly from escalating further.

TMZ was the first to report – and the only to provide some context. Per:

Sources connected to the situation tell us Conor asked MGK for a photo, which Kelly denied … and that apparently escalated into him pushing Conor, whom we’re told stumbled back and spilled his drink.

A source close to Conor tells us the fighter wanted to say hello to MGK, stuck his hand out and started walking up to the singer. We’re told MGK said something — that Conor couldn’t hear — and MGK’s security pushed Conor away. Our source says Conor doesn’t understand what the issue was, and was surprised by how he was treated.

A video of McGregor hurling a drink at Kelly surfaced several hours ago.

Conor McGregor throws a drink at MGK on the red carpet (via ig:laurademytrk) pic.twitter.com/H0naCNbMta

After that things took a turn south and were also captured on video:

The incident was said to have caused a delay in Machine Gun Kelly’s performance – it was put off for later in the show but still happened.

No charges will likely stem from the incident. Plenty of MMA fans took away from this clip that Conor is walking great considering the catastrophic leg break he suffered earlier this summer during the trilogy fight with Dustin Poirier.