Darren Till and Khamzat Chimaev have been setting the MMA world ablaze with their bromance. The affable twosome started off training at the All star gym in Sweden and followed that up with a trip to Vegas – in the lead up to Chimaev’s fight with GIlbert Burns.

Chimaev is getting a first serious test in the UFC cage on April 9th against the number 2 ranked Gilbert Burns. Prior to this fight, Chimaev fought 4 times in the UFC. In all 4 fights Chimaev got the finish in round 1.

Meanwhile Burns is coming off of a victory against Stephen Wonderboy Thompson following his unsuccessful attempt to get the title.

There were rumors that Chimaev was unable to get a visa to get to Vegas so UFC held off on announcing the fight up until this past weekend. The official announcement came during the UFC 272 broadcast.

While in Las Vegas, Nevada – the terrible twosome went to visit Extreme Couture and put in some rounds with a ‘certified lunatic’ Sean Strickland.

The 3 were photographed training together. 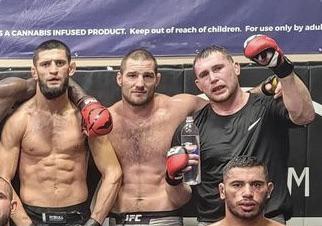 Some of the footage from the training session is scheduled to appear in the video logs of Chimaev and Till – still nothing like those raw videos of Chimaev that made their way from Thailand.