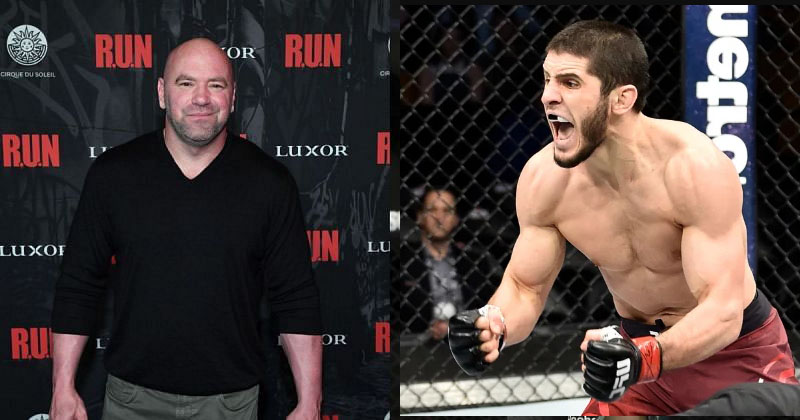 Khabib Nurmagomedov will be on the sidelines coaching Islam Makhachev alongside their longtime coach AKA’s Javier Mendez. But perhaps the biggest MVP of Islam’s camp is his manager – Ali Abdelaziz – but more on that later.

For now the focus is on the controversial advice Nurmagomedov had for Makhachev. During an appearance at the DC Check-In Nurmagomedov revealed:

“This Saturday, when he [Islam Makhachev] finish Dan Hooker, he just have to call out Dana White and all his life will change. It’s my opinion. Do you remember before the UFC give me title shot? I come to cage, very close to the cage to Dana. I say, ‘Hey, Dana don’t send me your bulls*** contract. I need real fights.’ He have to call out.”

Now of course – this strategy worked with Nurmagomedov. But Makhachev is another story. For one, he mysteriously jumped in rankings to number 6 having beaten Thiago Moises – ranked #15. At the time Makhachev  was at number 8.

In a case of extraordinary MMA math Makhachev  and his company man manager Ali Abdelaziz are launching a campaign to get to the lightweight title in spite of his winning streak featuring many unranked fighters. In his last 5 fights Makhachev  defeated 3 unranked opponents.

While Khabib Nurmagomedov would have us believe that Makachev mauls everyone, this move shades everyone from Tony Ferguson through Justin Gathje (another Abdelaziz client) through Poirier.

“He have to call out Dana because they don’t wanna give him top opponent. Who have nine win streak in UFC? Only champion. Only Charles Oliveira. What about other guys? Dustin Poirier, yesterday he lost. Like one year ago. I choked him out here. This guy, since 2015, he maul everyone.”