When Charles Oliveira challenges Islam Makhachev for the lightweight championship at UFC 280, Khabib will be in Makhachev’s corner. The UFC Hall of Famer recently revealed a prospective foe that Makhachev may run across in the future.

Khabib Nurmagomedov has now retired and is concentrating on coaching. He is considered one of the best lightweights of all time. Khabib speculated that an encounter with Mateusz Gamrot would be in Islam Makhachev’s future.

Highlights of the wrestling and grappling between Tsarukyan and Gamrot pic.twitter.com/vS1BAxwQ7s

This is surprising due to the fact UFC all but confirmed the next title shot will go to UFC featherweight champion Alex Volkanovski – with Dariush getting snubbed for the most part.

During the UFC 280 media day, Nurmagomedov shared a picture of the two lightweights. 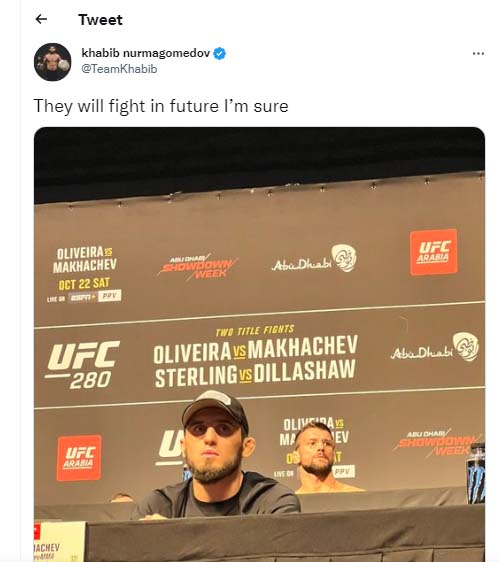 Khabib’s statement is significant considering he shares a manager with Beneil Dariush, who will be Gamrot’s opponent at UFC 280. Abdelaziz currently also manages Makhachev.

Islam Makhachev spoke with BT Sport’s Adam Catterall ahead of UFC 280. According to the No. 4 rated lightweight, his former training partner is a highly challenging teacher.

“Sometimes, I am angry because he’s not training now and push us so hard. I told the other coach ‘Hey, this guy not control’ because if we did sparring or wrestling – I remember when we’re training we did sparring, grappling… wrestling and then finished [the training]… but always he have some exercise after this training.”

Makhachev was questioned about if Nurmagomedov is a tougher coach than his late father. He answered:

“Yeah, I think so because he don’t have too much experience being a coach, but he push us so hard. For example, this camp, just this week I have light training, but all other couple months, so hard.”

Gamrot comes into UFC 280 on the wings of a really interesting win of Arman Tsarukyan. The two had a five round grappling heavy contest on UFC on ESPN card back in June.