Elliot started the fight completely dominating the Russian. Working from distance with his awkward head movement, Elliot was able to keep Ulanbekov guessing while hitting him with some hard shots, while also threatening with a few takedowns of his own.

Near the end of the round, Elliot landed a hard left hand that rocked Ulanbekov.

The second round started with a much more competitive fight. Tagir Ulanbekov was able to stand his own against Elliot, and started pressuring him with takedowns as well.

At one moment in the round, Tim started grabbing Ulanbekov’s glove, while also hitting him with strikes. It was a blatantly illegal move that the ref completely ignored in the fight.

Coach @TeamKhabib is NOT happy with Elliot gettin away with illegal glove grab ? #UFC272 pic.twitter.com/tSFg1v3kXM

In the final round, Ulanbekov completely dominated the round, eventually got Elliot down, and secured back control, the round ended as the Russian was close to locking in a rear-naked choke.

Ulanbekov’s coach, the MMA legend Khabib Nurmagomedov got FURIOUS at the blatant glove grab that pretty much cost his fighter the victory. To make matters worse it was not the only glove grab Elliot pulled during the fight. 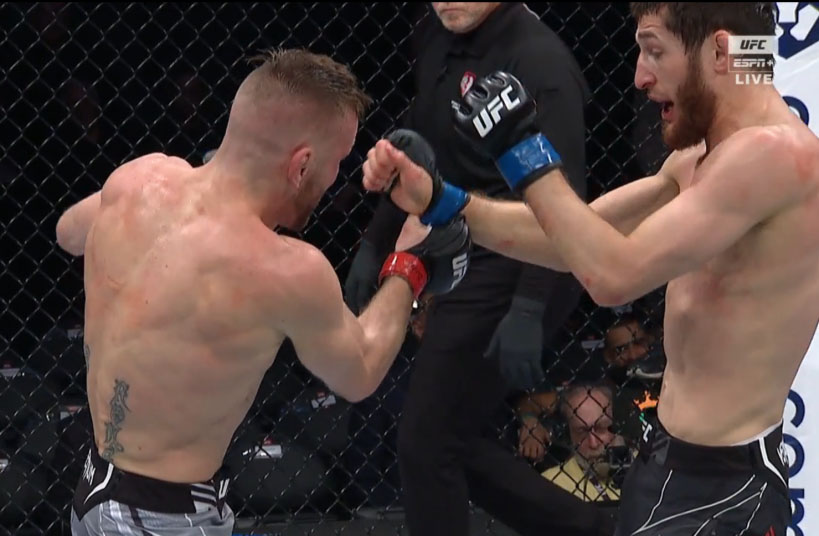 Safe to say twitter had a great time observing Nurmagomedov’s horror at Elliot playing dirty to win against his protégé.