Kamaru Usman is managed by Ali Abdelaziz – but in spite of this fact Usman still maintains control of his social media. In this particular case, perhaps this wasn’t the best choice.

P2P most dominant fighter in the entire UFC has been advising fans online to take their own life. Usman had posted the following on social media: 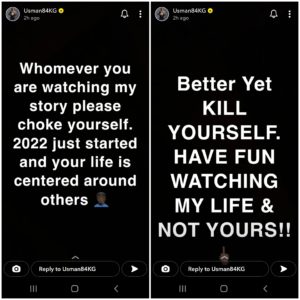 And in case you’re doubting the legitimacy of this posting there’s even a screen recording of the Welterweight champion’s snapchat:

Then following immediate backlash Usman clarified the context:
“Let me clear this up. I know that was tough – hey it was 4 am in the morning it was (inaudible) and obviously I typed that the wrong way. Let me rephrase this. For that hater, you know who you are, that particular hater – there’s one of you or maybe two of you that keeps watching my stories so you can have something to say to hate on – Choke yourself! Es me saying it now – Choke yourself. Choke – your – self. But for the rest of my fans and my actual fans, my real fans, I love you guys , I appreciate you guys, I always have and I always will.”

Majority of MMA fans gave Usman the benefit of the doubt and claimed he was hacked when he first came out with shocking posts. His subsequent posting seemed to have permanently alienated a number of fans.
WE ARE HIRING!