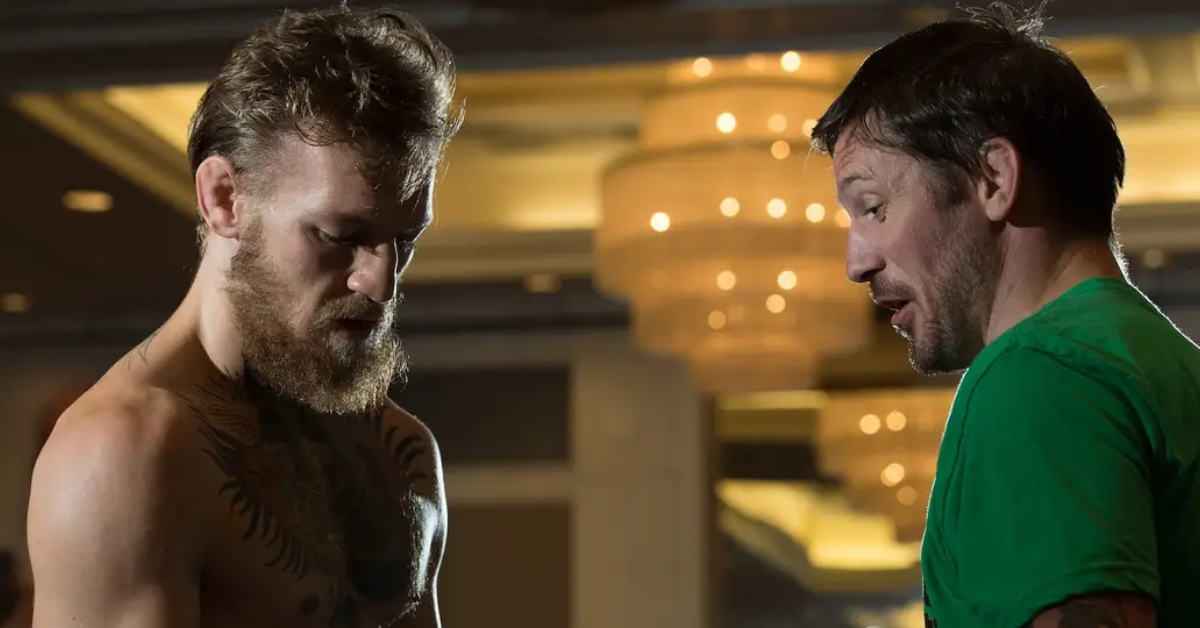 The controversial coach of Conor McGregor, John Kavanagh, is auctioning off The Irish sport star’s favorite pair of shoes to help raise funds for an Irish mma fighter that suffered an injury in training that rendered him unable to use his legs.

Ian Coughlan is an Irish fighter who also trained at Straight Blast Gym (SBG) in Ireland. Coughlan suffered an injury this year that left him paralyzed and McGregor along with Kavanagh is helping raised fund for a promising stem cell treatment in Germany that could help Coughlan regain some of the function of his legs. Currently, 957 people have donated and already gathered €44,858. To fill in the gap, John Kavanagh is planning to sell McGregor’s  favorite shoes.

Kavanagh told Helwani during an appearance on The MMA Hour:

“In the lead up to the Mayweather fight, Conor had a pair of boots that he wore for the training camp that he kind of fell in love with that he wore them in all the sessions. At the end of the training camp, I certainly took note that this was going to be one of the biggest combat sports fights of all time.”

“After the last session, I sneakily took them away and put them to one side. It seems the time now that I took them out of the safe. I haven’t done anything to these, they haven’t been cleaned up because I knew they were going to be a very important piece of combat sports memorabilia and we’re hoping we have an auction page set up.”

Kavanagh is sure that they will reach the goal for the treatment by next summer.

“I have done my research on this treatment and I believe by next summer maybe we could have him [Coughlan] come on the show and show what it’s done and what it’s meant to him. We needed to raise 75,000 euros for this and we’re already knocking on 45,000 euros. A big chunk of that came from the man himself, Conor and now he’s put these in.” Added Kavanagh.

Helwani personally pitched in a 100$ to the gofundme prior to SBG donations – when he first heard about the unlucky incident.

Coughlan shared previously how the incident derailed his entire life:

“The actual second that my head hit the wall, I just started calling “Ambulance! Ambulance! Ambulance now!”. I knew something was, was very bad, because you know like we’re training for a long time you get injuries, you get serious ones, you have not so serious ones… The second my head hit I knew it was something really bad. A feeling come over my body like like nothing I’ve ever experienced. And then of course – yeah I remember the the frantic wait for the ambulance and the trip there. And you know all the aftermath.”

“It was almost, um, do you know uh things and needles or the pins and needles do you know if you’re a [ __ ] off a little bit of sleep? It was it was like a very intense version of that. Kind of went all through my body – like a shock wave to my body. ”

You can read more about what Coughlan went through here.