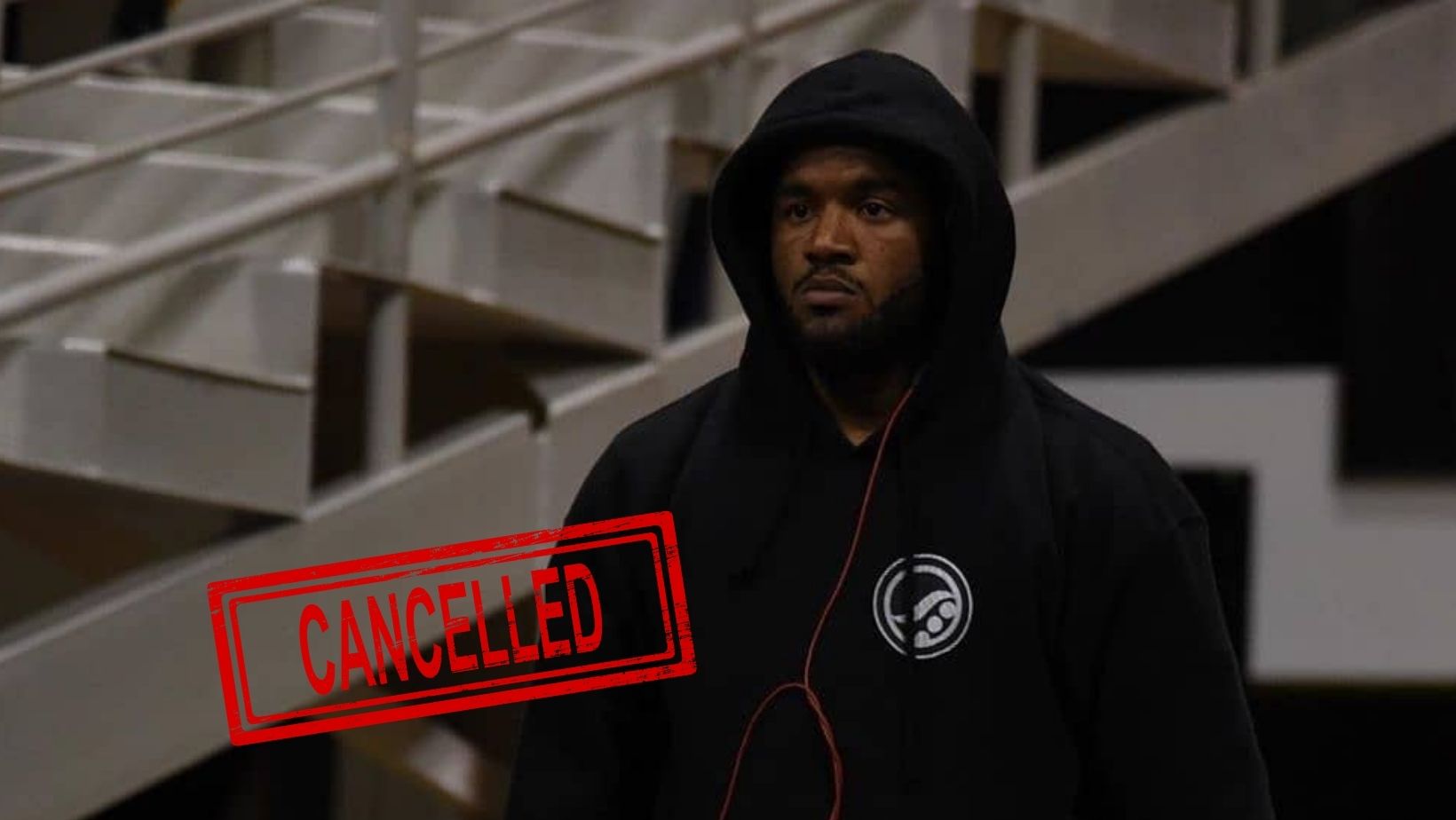 Jiu jitsu is having a unique moment. Even though there were scandals previously, this time the victims have a powerful advocate in ADCC organizer Mo Jassim. And it seems as though Jassim’s initiative to not let the Fight Sports abuse cover up scandal blow over influenced other victims to seek resolution in their own disputes. One particularly interesting case we haven’t previously covered is the case of Checkmat athlete Jackson Sousa.

In 2018 several reports surfaced regarding Sousa – he was sending sexually aggressive messages to female members of the jiu jitsu community in Germany. A local outlet reported:

“We openly asked for help and told us that he harassed us across all channels, that he sent genital pictures of himself, asks for nude pictures and promised advantages and free training for sex with him. But none of the trainers here reacted, ”says Verena.

And in fact none of the community really reacted. In spite of there having been reports at the time they seem to be scrubbed from the jiujitsu outlets where they were featured. If you search these prominent websites for his name you will find techniques, promotional camp sign up posts and other propaganda.

And what he’s done isn’t exactly naïve. Below is attached one of the most significant accounts of abuse suffered from Sousa: 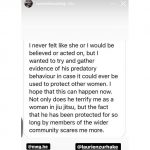 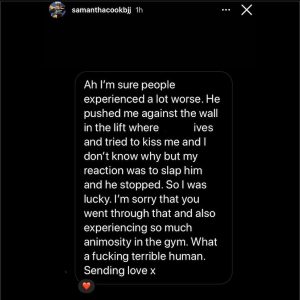 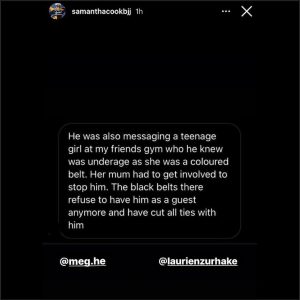 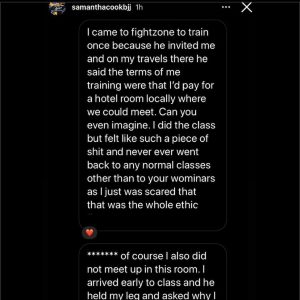 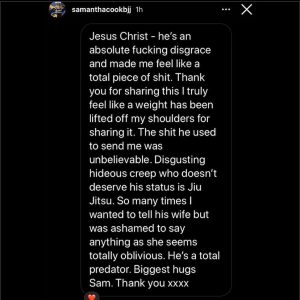 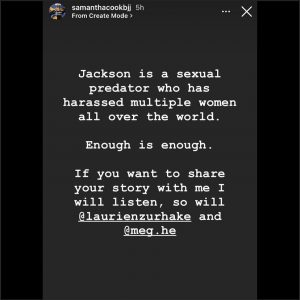 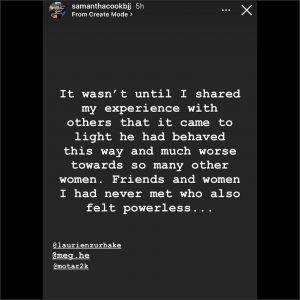 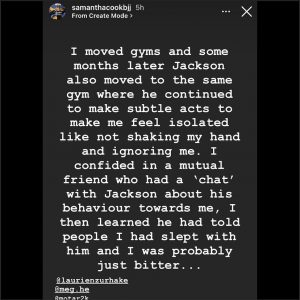 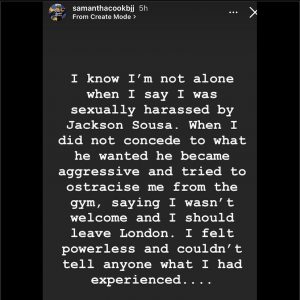 Some time after these accusations were shared again, shoyoroll, Sousa’s main sponsor announced they would be dropping him saying:

In light of the recent outpouring from the female BJJ community entailing sexually predatory and abusive behavior from prominent male athletes, Shoyoroll has made the decision to formally end all sponsorship and affiliation with Jackson Sousa.

This is a challenging time for us as we reflect upon what values we uphold as a brand, and more broadly as a culture. The seriousness of the allegations cannot be ignored and this sort of behavior should no longer be tolerated or normalized. Our sport has evolved over many decades and with that growth has come the participation and inclusion of more and more women.

They are our friends, daughters, sisters, girlfriends, wives, mothers and grandmothers. As a culture, we’ve often neglected to give them the space to be heard and provided them with opportunities to thrive. We sponsor female athletes and we stand in solidarity with their stories and voices during this incredibly shameful time. 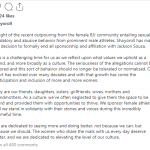 But why did it take 3 years to do anything?

Back in 2018 neither Shoyoroll nor Chekmat made any statements. Now Chekmat is eager to distance themselves from the mess. Team founder released the following statement:

First and foremost, we want to acknowledge Samantha Cook for her bravery in bringing light to a dark issue by sharing her story. Given that BJJ has traditionally been such a male dominated industry, you’ve given many women, not just in the Jiu Jitsu community, but around the world, the strength and confidence to speak and be heard.

The allegations against Jackson Sousa show a pervasive pattern of abuse and manipulation, and Checkmat is saddened and appalled by his reported behavior. He has been suspended from Checkmat, and a thorough review is ongoing.

Checkmat has a zero tolerance policy for any forms of harassment, discrimination, bullying, violence, sexual abuse or sexual misconduct at any of our affiliate locations.

We understand that we must empower individuals to speak with the confidence of knowing that what they say will be heard. Communication is vital for meaningful change, and we are taking the necessary steps to ensure that individuals will have a safe way to communicate any incidents of abuse to Checkmat.

Checkmat is currently reviewing our existing protocols with professionals to ensure that the best process and safeguards are in place for individuals to feel safe reporting incidents of any kind of abuse or harassment and also ensure a fair process for all parties involved.

Checkmat is committed to a long-term comprehensive effort to equip every affiliate within the team with the tools that they need to combat this behavior and quickly and effectively investigate and take appropriate action.

Checkmat HQ will advise affiliates of the protocol in place at HQ for safe reporting and investigation of any claims of abuse or harassment.

Affiliates will then need to consult with legal professionals in their home states and countries as to best practices, taking into consideration local laws and regulations.

But Chekmat and Shoyoroll are not the only complicit parties. ADCC went on to send an invite to Sousa to participate in the prestigious competition in 2019 as well (likely due to him winning a bronze medal in 2017). And they aren’t alone, Sousa was featured at several of professional grappling events in USA, Brazil and Europe.

But still behemoths of the industry remain silent. Flograppling issued a sad article with the bare minimum of information about the Fight Sports scandal. They seemed to be pressured into even acknowledging the issue by both Jassim and angry commenters on their social media. There’s no mention of Sousa or any other relevant information. The International Brazilian jiu jitsu (IBJJF) is also mum on the topic. After the Lloyd Irvin students scandal, they’d instituted a background check policy for registered members but it doesn’t seem to be very effective. Especially since not all abusive behaviors are criminal.

Sousa instructionals were previously available at the Grapple club. It seems the team had made a decision and they were suspending their business relationship with Sousa. Upon further inspection it seems that they’re still selling Sousa’s bjj course. The previously viewed post is nowhere to be seen.